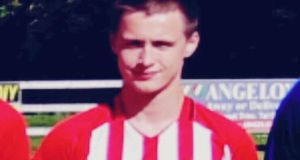 Tributes have been paid to 15-year-old Mikey Leddy from Co Meath who died on holiday in Lanzarote this week.

Mikey was fatally injured after falling from a wall just before 4am on Monday at the seafront of Puerto del Carmen. He was holidaying with his parents on the Spanish island.

Navan O’Mahonys GAA club, who Mikey played Gaelic football with, were among those to pay tribute to the teenager.

“Navan O’Mahon’s wish to express our profound sadness and shock at the tragic passing of Mikey Leddy. Our thoughts and deepest sympathies are with the Leddy family and Mikey’s many friends and teammates,” it said.

St Colmcilles GAA in Bettystown said Mikey had “graced Piltown and Seafield on numerous occasions and was a credit to his family and club”.

Rataoth GAA said Mikey had played against their U16 team and extended its sympathies to “his family, friends and team mates”.

Johnstown Football Club said the “tragic event” has “shocked us all”. “We would ask that everyone remembers Mikey for the champion he was and his fighting spirit. RIP Mikey Leddy,” it said.

A former trainer posted on Facebook that it had been an honour to coach Mikey. “He was a character, always gave 200 per cent for his team mates, a lovely kid and a true champion for Johnstown. My thoughts and prayers are with his family,” said Ross Symonds.

In Navan, Fianna Fáil councillor Tommy Reilly said the boy was a popular young man with a large circle of friends.

“It’s a terrible tragedy to happen to a well-known Navan family . . . two families, relatives and friends are heartbroken tonight.”

The Department of Foreign Affairs said it was aware of the case and is providing consular assistance.