Thousands turn out for cardiac care upgrade in Waterford

Permanent catheterisation lab operates 9am to 5pm Monday to Friday, but demand is 24/7 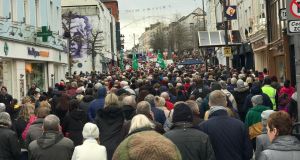 Up to 10,000 people marched in Waterford city earlier today calling for a 24/7 cardiology service at University Hospital Waterford (UHW).

Up to 10,000 people marched in Waterford city earlier today calling for a 24/7 cardiology service at University Hospital Waterford (UHW).

The South East Broken Hearts rally sought to highlight the lack of interventional care at UHW, where a permanent catheterisation lab operates from 9am to 5pm Monday to Friday. A temporary cath lab at the hospital offers a diagnostic service and cannot treat patients.

Patients who require emergency cardiac care outside of the operating hours are required to be transferred to Cork University Hospital, where a 24/7 service is provided.

Aoife Fitzgerald got involved with the 24/7 campaign because of her family’s history of heart trouble. Her brother has died and her father has also suffered, she said. But it extends further into her circle: “I have friends whose siblings have passed because they couldn’t make it to Cork in time. There’s a cath lab there that isn’t getting the State funding it requires. We have the facilities but we don’t have them supported.”

While Minister for Health Simon Harris has approved a second lab for UHW, campaigners continue to hold out for a 24/7 cardiology service.

Speaking before Christmas, Mr Harris said almost all staff are now in place to expand the existing lab’s operating hours to an 8am to 8pm weekday service. He said the second lab would increase capacity for patients and address waiting times at the hospital. A national review of cardiology services is due to be published later this year.

Campaigners remain concerned about people suffering heart trouble in the evening, thereby missing out on the region’s service.

Joan O’Shea, from south Kilkenny, was among those who were unhappy that UHW is the only nationally designated cardiac care centre that does not provide a 24/7 service.

“We have it Monday to Friday, 9 to 5 – that’s the only time you can have a heart attack in Waterford. And you can see from the crowd here today, there’s more than me thinking that.”

Another who turned out for the march was Jenny Pheasey, who went through a “near miss” experience when she suffered a heart attack in May 2014. She says she arrived at UHW after 4.30pm on a Friday evening and thinks of herself as one of the “lucky ones”, because she made it to the hospital inside of working hours.

Una Dunphy, who is a regional co-ordinator with the Still Waiting campaign backing the Sláinte care plan as well as a People Before Profit candidate for Waterford, said numbers turning out to protest were needed to force resolution.

One of the local campaign groups, Healthcare Equality for the South East, had spokesman Matt Shanahan co-opted on to Waterford City and County Council last week as an Independent. This is first time the single-issue campaigners have entered electoral politics.

Cllr Shanahan claims there are a number of “discrepancies” in the figures concerning this contentious issue that have yet to be resolved. One of these, he said, is travel times.

The European Society of Cardiology recommends that hospitals are able to deliver a 24/7 service for primary percutaneous coronary intervention, a treatment for people requiring emergency treatment as a result of a heart attack.

It also recommends that 60 minutes is the maximum time a patient presenting with this condition has after a diagnosis for the life saving procedure to be carried out. For patients who are being transferred to Cork, the maximum time is 90 minutes.

The 90-minute travel time is a standard set by the acute coronary syndrome programme of the Health Service Executive. Data collected by Dr Ray Griffin, a lecturer at Waterford Institute of Technology, and Wexford TD Mick Wallace’s office, using figures from the National Ambulance Service, showed that out of 196 cases, only three made it within the 90 minutes. Responding to the information last year, the HSE said its national guidelines are based on door-to-door transport times only.

While political parties were welcomed, others warned the that cardiac issue could be used against them in the future. Hilary O’Neill, chairwoman of the South East Patient Advocacy Group, said there was one way to bring about a 24/7 service.