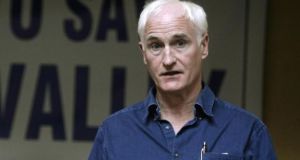 Building the new National Maternity Hospital on current design plans leaves the State open “massive and costly” changes – possibly of up to €1 billion - to make it more energy efficient, climate activists have claimed.

Experts told a press conference in Dublin on Tuesday the “near complete oversight of energy efficiency measures” in the design of the hospital could see the Government “in breach of yet another European directive”.

Climate activist Donna Cooney said she was considering whether to take judicial review proceedings to force changes to the proposal.

Ms Cooney, architect and broadcaster Duncan Stewart, and Jeff Colley, editor of an environmental design magazine, claimed the maternity hospital must be a “nearly zero energy building” (NZEB) in line with the EU’s Energy Performance of Buildings Directive updated in 2010.

They told a press conference on Tuesday the current plans for the €300 million hospital do not reach this standard.

Mr Colley, editor of Passive House Plus magazine, told the press conference that failure to meet this standard would be “a clear breach of European law”.

Mr Colley said the date on which a project obtained planning was “irrelevant” and that, as the new hospital will not be completed until “long after the end of 2020”, it must be an NZEB building.

Mr Colley claimed the additional energy costs of the hospital if the plans were now amended now at design stage could be €1 million a year, but he said it was difficult to provide an exact figure.

He claimed changes introduced by the Department of Housing in 2017 to the building regulations “ignore this fact” and made no reference to the “absolute NZEB deadline for all new buildings” after December 31st, 2020, and instead offered “transitional arrangements”.

The Department of Housing states the official building regulations require that “all new buildings other than dwellings commencing construction from January 1st 2019 are required to be NZEB”.

Minister for Health Simon Harris said earlier this month his understanding was that the project falls within the transitional arrangements provided as part of the implementation of the legislation.

“He has been misinformed by illegal building regulations,” Mr Colley said. “There is no excuse for this oversight. The State has known about these deadlines since 2010.”

Climate activist Donna Cooney said mothers and newborn babies “deserve the best in building standards” as hospitals pose particular risks to their occupants who are “among the most vulnerable people in society”.

Ms Cooney said she was contemplating taking legal action to seek an injunction to restrict the construction of this building “until its design is upgraded to achieve a so-called “passive house” standard. The standard is a voluntary energy-efficiency standard to reduce a building’s impact on the environment.

Mr Stewart said Ireland’s existing standard for new public and commercial buildings was “shockingly inadequate” and out of line to meet our climate-change targets.

He said if the hospital was built according to the current plans, the State was “leaving the door open to the possibility of having to undertake a massive and costly scale retrofit in the near future”, which could be up to €1 billion.

“Deep energy upgrades to existing buildings are most likely to cost at least 10 times what they would have if efficient and clean performance was built into the initial design and construction,” he added.

Mr Stewart called on Taoiseach Leo Varadkar to take a role, saying it was “shameful” the Government and different departments involved were not taking responsibility.