Hospital staff to be investigated over alleged ‘derogatory’ online posts 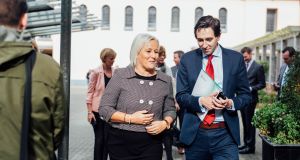 Minister for Health Simon Harris with Colette Cowan, chief executive of University of Limerick Hospital, who has told employees in an email she is gravely concerned at breaches of confidential information. Photograph: Brian Arthur

University Hospital Limerick says it plans to investigate staff over the alleged leaking of confidential patient information as well as “derogatory” Facebook posts.

Staff have been told they may face disciplinary action for remarks on social media “made in the name of the HSE” which are offensive or derogatory.

The warning comes from Colette Cowan, chief executive of University of Limerick Hospitals Group, who has told employees in an email she is gravely concerned at breaches of confidential information related to the business of the health service and in particular concerning patient records.

UHL suffers the worst emergency department overcrowding of any hospital in the State. Last week, the Limerick Leader reported that a male patient had been found dead next to his trolley in mid-December with a broken neck. The exact circumstances of the man’s death remain unclear.

In her letter, sent to staff last Friday, Ms Cowan warns they are bound by HSE codes of conduct, breaches of which may constitute a breach of their terms of employment and lead to disciplinary action.

“Equally of concern is the misuse of social media that may inadvertently lead to a breach of confidentiality.”

“There is also evidence of media attending UHL and photographing in corridors, taking sound bites (sic) from staff without prior consent to enter patient areas ... these will all be investigated and actions taken.

Any slip of standards by a small number of employees does reputational damage to UL Hospitals but most importantly it hurts the people we serve, our patients and our colleagues

“This has been compounded in the last 48 hours by headlines that have created serious distress to a bereaved family and equally distress to the consultant and their team providing care. There was an unauthorised disclosure of confidential patient information.”

As a result, she says, the hospital group is unable to ensure compliance with data protection regulation and will have to report this as a data breach.

“Alongside this, I have sought an investigation of the issues listed to identify persons who have breached their contract and the code of Standards and Behaviour.”

“Unfortunately any slip of standards by a small number of employees does reputational damage to UL Hospitals but most importantly it hurts the people we serve, our patients and our colleagues.”

There were 51 patients waiting for admission to UHL on Tuesday morning, the highest of any hospital, according to the Irish Nurses and Midwives Organisation.