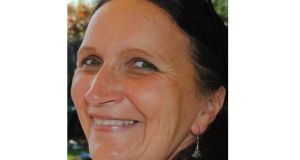 Dr Emer Feely, a specialist in public health medicine and a medical graduate of UCD, had been battling a terminal form of blood cancer, multiple myeloma, since 2012. Photograph: RIP

The death has occurred of Emer Feely, the wife of the State’s chief medical officer Tony Holohan, after a long illness.

Dr Feely, a specialist in public health medicine and a medical graduate of UCD, had been battling a terminal form of blood cancer, multiple myeloma, since 2012.

Dr Holohan took time out from his work duties last summer to helping with the care of his wife after she entered palliative care in early July.

He said at the time that he wanted to give his “energy, attention and all of my time” to his wife and to their two teenage children, Clodagh and Ronan. He returned to the role in October.

Dr Feely’s death notice said that she died peacefully on Friday at Our Lady’s Hospice in Harold’s Cross, Dublin in the company of her husband and children. “Emer will be forever remembered by the Holohan and Feely families and her wide circle of dear friends,” the notice states.

Dr Holohan has been the public face of the State’s response to the Covid-19 pandemic in his role as chairman of the National Public Health Emergency Team.

The State’s deputy chief medical officer Ronan Glynn has been deputising for Dr Holohan at Nphet’s media briefings this week as he attended to the care of his wife.

Taoiseach Micheál Martin said that his thoughts and prayers were with Dr Holohan and children following the sad passing of his wife.

“Dr Emer Holohan made a significant contribution to the health service, including her work on the health strategy when I was minister for health,” he said.

“Tony and his entire family have given so much to this country since the start of the pandemic. At this time, I would ask for as much space and privacy to be given to them as possible.”

Minister for Health Stephen Donnelly extended his condolences to Dr Holohan and his children on their bereavement.

“The thoughts and prayers of Tony’s colleagues in the Department of Health are with Emer’s family, including her parents, siblings and her friends, as indeed are those of many people across the country,” he said.

Expressing his sympathies in a message posted on Twitter, Minister of State for European Affairs Thomas Byrne said: “Tony has been an extraordinary leader in the pandemic while all the time caring for his dying wife. May Emer now rest in peace.”

Sinn Féin president Mary Lou McDonald tweeted: “Deepest condolences to Dr Tony Holohan on the death of his wife Emer. Our thoughts are with him and his children Clodagh and Ronan.”

Tributes from members of the public and thanks to Dr Holohan for his guidance during the pandemic flooded the online condolences book under the Rip.ie notice of his wife’s death.

“You have been so important in maintaining calm and comfort for us all during the past year, despite the sad circumstances of your private life. We are so, so sorry for your loss and will be thinking of you and wishing you well in the days to come,” wrote the Monaghan family.

A messaged posted by a “Cork family” said: “You are the only person we placed our trust and hope in, to guide us through this pandemic. May you and your family find peace and courage in the weeks and months ahead.”

Someone from Kerry wrote: “In the midst of caring for your beautiful wife Emer, Dr Holohan, you also unselfishly cared for all of us. May yourself, Clodagh, Ronan, the extended Feely and Holohan families feel the love and sympathy of the entire country on the death of Emer.”

“You have given us so much at a time when your own life was in turmoil so now it’s our turn to be there for you all and a candle is lighting in our home for you all tonight,” wrote a family from Tipperary.

Another commenter said: “By your strength in leading our nation through its darkest days of Covid and your honesty and sincerity in returning to your job with such a challenge as your wife being sick, you have shown a level of commitment to Ireland that none should doubt.”

“The nation are behind you at this difficult time,” wrote a healthcare worker from University Hospital Limerick in Dr Holohan’s home county.

Dr Holohan has helped steer the public through the worst health crisis in a century, a pandemic that has cost the lives of more than 4,000 people, infected more than 210,00 people and locked down the State three times with public health restrictions to curb the spread of the virus.

His decision to step back from his critical role last summer to care for his wife and children led to outpouring of praise and sympathy for his public service during the global pandemic.

Tributes flooded in from Government ministers and political leaders for the man who has become a household name in the country for fronting the daily press briefings on live television.

He announced the decision to step back temporarily from his role last summer in a personal statement at the end of a Thursday evening Nphet briefing at the Department of Health in July .

“As a husband and father and as a public health doctor, I am conscious we have been through tough times in recent months and many families have been affected by the course of Covid-19 suffering pain and the loss of loved ones,” he said at the time.

“I would like to thank everyone for their support, understanding and respect for my family’s privacy and would wish that to continue.”