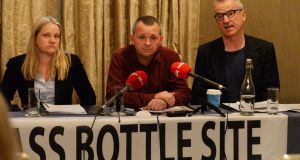 Residents of Ringsend in Dublin are to begin a series of protests in a bid to force the Government to set aside the old Irish Glass Bottle site for 100 per cent council and affordable housing.

The National Asset Management Agency (Nama) last week signalled that designating the site as a strategic development zone could allow it to fast-track planning permission for up to 3,000 new homes in the Poolbeg peninsula .

Under current planning rules only 10 per cent of the homes will have to be reserved for social housing.

About 100 residents of the area held a meeting last week and formed the Irish Glass Bottle Site Housing Action Group, which is now working with volunteer architects and planners to draw up what they say will be a viable alternative plan for the site.

The group said today that the proposed 10 per cent social housing put forward by Minister for Housing Simon Coveney was an “outrageously low” figure. It demonstrated that the Minister and the Government neither appreciated the scale of the housing crisis nor had the ability to deal with it effectively.

Spokeswoman Annette Mooney said there was a huge housing crisis in Dublin and that Nama land must be used to solve it.

“The easiest way to do this is to build council housing for those who cannot afford to buy a home. In the long run this would help save the State money as it is currently paying out €344 million in rent supplement to private landlords.”

Ms Mooney noted Nama planned to spend €800 million developing the site but added that the Act establishing the agency committed it to contributing to the social and economic development of the State.

Architect Mark Price of People Before Profit said the Irish Glass Bottle site was effectively publicly owned as it had been part of Nama’s portfolio since 2012.

There was therefore no need for ‘fast-track’ planning, because the State was the owner of the site.

“Given the enormous housing crisis under no circumstances should the vast majority of this cite be sold off for development in the open market at market prices.”

Townsend Street resident Claire Kelly said her family was from Ringsend that there were now several generations of one family living in some houses.

“There’s two and three families living in one home, squashed in their homes because they don’t want to be pushed out miles and miles away from their families.

“How are young families supposed to survive when they are completely cut off from all of their ties? That’s not a sustainable future. That’s not what we need. We need our communities to be kept strong. We need council and real affordable housing.”

The group will protest at the Irish Glass Bottle site at 1pm on Saturday and march from there to the Custom House. The residents said it would be the first of a number of such actions.