Drone footage recorded on the 23rd August shows the aftermath of the heavy rainfall at Swan's Park in Buncrana up to Cockhill Bridge and beyond. Video: Windy Day Media 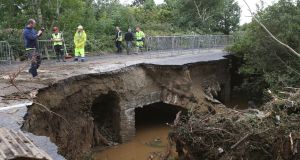 A collapsed road at Quigley’s Point in Co Donegal, after torrential rain and floods left a trail of destruction. Photograph: Niall Carson/PA Wire

The Government needs to “substantially” increase its €430 million budget for flood defences to deal with extraordinary events such as this week’s flash floods in the northwest, the Minister with responsibility for this issue has said.

Kevin “Boxer” Moran, Minister of State for the Office of Public Works, was commenting on Thursday night after he completed a two-day tour of areas affected by the flooding.

But with a warning from Met Éireann of a risk of further flooding overnight on Thursday in the northwest, when up to 40mm of rain was expected, the army has been called in to help those deal with the aftermath of the devastation wrought by Tuesday’s floodwaters.

The Defence Forces will deploy personnel to Donegal on Friday morning to assist with ongoing clearance operations. Thirty members of the 28th Infantry Battalion are to be deployed to Buncrana and Burnfoot on request from Donegal Co Council in an “aid to civil authority” role, and will assist in the clearance of debris.

Over 100 people had to be rescued from cars and houses and as many as 500 houses have suffered major water damage in Donegal. Two-thirds of the average rainfall for August fell in Donegal, Derry and Tyrone in nine hours of torrential rain that washed away roads, hillsides and culverts.

Mr Moran said he had been in constant spoken and text communication with Taoiseach Leo Varadkar on the issue.

He has arranged for a meeting to be held on Friday morning of the National Emergency Co-ordination Group, which comprises representatives from every State agency which can respond to such flooding and extreme weather events.

Speaking to The Irish Times last night, Mr Moran said he had never witnessed such devastation caused by a weather event before, and characterised it as a new form of climate threat.

“We are used to the threat of flooding in old towns and villages close to rivers. But this is different. As is the coastal erosion I have witnessed in Co Kerry this year.

“We have to heed what is happening and we have to learn more and work with the powers-that-be.

“We have allocated €430 million between now and 2021 for flood defences. But based on what I have seen today, I think we have to go and look at new areas and new dangers. We need to look at the road network. Clearly there are culverts that are simply not able to take this volume of water,” he said.

“I will be speaking to Minister for Finance Pascal Donohoe about this in the run-up to the Budget. This is an issue that goes beyond a budget. We have to find extra money to deal with it in the future, based on what I have seen.”

Mr Moran also said another scheme used during the flooding crisis of winter 2015 – and administered by the Red Cross – might also be reactivated. That gave assistance to businesses and community organisations affected by flooding.

Minister for Social Protection Regina Doherty has activated the Humanitarian Assistance Scheme to help people whose homes have been damaged but cannot meet the costs of repairs.

Meanwhile, Mr Varadkar, in a video message posted to his Twitter account, said he was shocked at the extent of the damage caused by the floods. He said he had been briefed as to efforts to address the fallout and that the Department of Social Protection has activated its €10 million humanitarian assistance programme.

Residents affected will also be able to apply for grants to help replace more substantial property, he said.

Gardaí relayed warnings of “very heavy rain expected in Donegal and surrounding areas” on Thursday night, imploring motorists not to drive through flooded roads, which may be damaged.