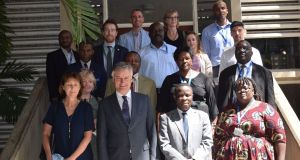 For the past decade or so, Irish universities with an eye on expansion have been looking towards Asia or the Middle East.

Most major colleges now have formal links or sattlelite campuses spread right across the region and are attracting growing numbers of international students.

In a bid to increase their global reach, some Irish universties are now exploring a new frontier: Africa.

Trinity College recently dispatched an international relations team to visit universities in South Africa, Kenya and Tanzania with a view to developing partnerships that can lead to student exchange schemes, joint degrees and collaborative research opportunities.

Speaking to The Irish Times at the end of the three-country tour, Trinity Provost Patrick Prendergast said that although this first trip was undertaken primarily to establish relationships, student exchange schemes with some South African universities are already on the cards.

“These should materialise next year in September 2020, as it will take us a year to sign the agreements. We need to know our partners before we start signing deals with them, but we know we will get to it,” he said.

Trinity’s decision to seek out partners in Africa is aligned with its new global relations strategy, which seeks to further diversify and grow its student body, which numbers 18,000 undergraduates and post graduates from 120 countries.

Since 2010 the university’s in-take of international students for an academic year has nearly quadrupled, jumping from under 1,200 in 2010 to over 4,600 in September 2018, according to the institution’s statistics.

Currently 26 per cent of its students are from outside of Ireland, primarily from the US, Europe and Asia.

The strategy’s third incarnation wants to take advantage of the coming changes in global population dynamics, says Prendergast, which will see Africa become the world’s most populace continent by the end of the century.

“It is important to us that the kind of education we offer and build in our classrooms and seminars has a global dimension, so we need to recruit,” said Prendergast, before adding: “We then noticed in our global relations activities that more opportunities exist in Africa than we have been able to exploit up to now”.

In terms of research collaborations, Prendergast said that of the third-level institutions he had visited in late July, he can see Trinity developing partnerships with some of the South African universities, many of which were on a par with it in terms of facilities and standards.

“If you are studying life sciences or bio technology in Ireland then you must go to a place with an international reputation that has the same labs and equipment as back home. That’s where we want to send our students and they are here in South Africa,” he said.

“They are in the mainstream of global research and are as good as Trinity College if not better in some areas, so we are dealing with peers here,” he maintained.

South African universities were keen to talk about business and innovation entrepreneurship training, said Prendergast, given Trinity was a world leader in this area.

In addition, the provost believed there was potential to collaborate with the University of the Western Cape on constitutional governance and the rule of law, as it was an area of strength for the South African institution that Trinity also wanted to develop.

But before research collaborations get underway, Ireland’s top ranked university wants to develop successful student exchange agreements and joint degree programmes in South Africa, and Prendergast will return to the country later this year to nail down the former.

In terms of Tanzania and Kenya, Prendergast said Trinity was interested in establishing programmes around innovation and entrepreneurship in universities in both countries.

He went on to say that in the past Trinity students had been involved in collaborative initiatives with counterparts from the University of Dar es Salaam in Tanzania, developing new business ideas around water and sanitation. But for financial reasons these fell by the wayside.

“We would like to restart them and I was glad to see that so too would the University of Dar es Salaam,” he said, “So, we will be submitting a proposal to the Department of Foreign Affairs and Trade and Irish Aid to restart the funding for this”.

When asked if developing new ties with Africa was partially a response to the negative impact that Brexit could have on English universities’ popularity with foreign students, Prendergast insisted Trinity would have moved to engage more with the continent even if the UK had decided to stay in the EU.

However, he conceded that Brexit was prompting Trinity’s global relations team to reevaluate how it worked, as they were already seeing a significant increase in the number of applications the university was receiving from non-EU countries.

“After Brexit, Trinity will be the highest-ranking, English-speaking university in the EU. Foreign students will increasingly see us as the place to go… Last year we had a 50 per cent increase from international students in our taught masters programmes, and we believe that this is partly due to Brexit,” he concluded.