Opinion: We need a robust, reliable and fair system that prepares young people for life 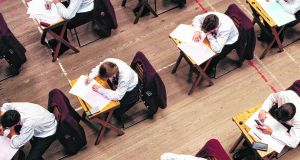 It makes little sense that 14 years of schooling is judged in a three-hour exam on a sunny June day.

Anna sat the Leaving Certificate in the summer of 2017 and secured a place in Trinity. She got 580 points, was pleased with her results, yet her next words nailed the problem: “If I was to sit it today, I wouldn’t get 200 points.”

Four months on, she had forgotten what she had memorised. Her typical school day was to passively listen, take notes, learn by rote and regurgitate at exam time. Where teachers malfunctioned, she got grinds. Her mother told me earlier that year she worried about the endless hours studying in her bedroom and having to be coaxed out to say hello and eat.

Despite its many failings, the present system ticks many boxes – except fairness.

The recent National Association of Principals and Deputies (NAPD) survey on Leaving Cert reform, with data from students, parents, teachers, principals and deputies, leaves us in no doubt that reform is urgently required.

Across all the big issues surveyed, students voiced the strongest dissatisfaction. The Leaving Cert did not come close to preparing them either for work or for third level (are we surprised when the first-year dropout rate for some third-level courses is more than 30 per cent?), never mind preparing them for life.

Shouldn’t the Leaving be more than an entrance exam for third level? It is time to disentangle it from CAO and bring back matriculation.

Or maybe it’s time to create a technical stream after junior cycle, as Germany does, to prepare for employment in industry and trades?

Why does everyone have to aspire to university, when so many are, post-Leaving Cert at least, unsuited?

Also, what about expanding apprenticeships to traditional white collar careers, as has happened in accounting and insurance?

Change is needed, but whatever we do, we must end up with a robust, reliable and fair Leaving Cert.

Despite its many failings, the present system ticks many boxes – except fairness. How can it be fair when some students have unlimited access to external help and are taught in smaller classes in schools with better facilities?

And don’t be surprised when some of the strongest resistance to reform comes from the parents of these students – “It did me no harm, sure look where it got me, etc”.

Reforms must be dynamic, evolutionary, ambitious but also realistic and doable. We should add “timely”: University College Dublin first introduced computer science as a degree subject in 1972. It then took all of 46 years, half a lifetime, to introduce it, in 2018, to the Leaving.

A student recently told me that his best teachers were those who gave the best notes. I, naively, was hoping he would choose those who facilitated learning, made them think, asked awkward questions, advocated self-directed learning, turned them into problem solvers and collaborators and developed their curiosity.

Then I remembered that I once held some teachers in high regard for the very same reason. It’s what the Leaving did to us 40 years ago and continues to do. How can we blame young people who have learned to play the game, just as we did? It’s the game, stupid!

Two perfect storms are upon us: one is climate, the other is to do with economics, politics and democracy.

Most intelligent people understand the existential climate crisis at hand and encouragingly, young people are ahead of their elders.

And most intelligent people also understand how economic and political systems have disenfranchised billions globally, leading to the populism now threatening the democratic order we had all taken for granted. We will need to embed these two issues of our time at the core of any new curriculum.

Young people must learn how democracy works by experiencing it in action. We need to loosen our hierarchical structures, bin the idea that we know and they don’t. They are but “kids” yet they address us as “sir” and “miss”. Learner voice must be engaged with. Democracy must be learned in our schools.

It makes little sense that 14 years of schooling culminates in a final two years of rote learning and cramming, all to be judged in a three-hour exam on a sunny June day. We must immediately reduce student stress over these two years, lest they continue to leave us burned-out and disillusioned.

While Leaving Cert reform needs to be about much more than assessment, here we can make a good start.

Instead of a three-hour terminal exam, can’t we have a shorter exam in the summer of fifth year and similar in sixth year? Split the course, take the test and bank the marks.

For the examinations system there won’t be extra material to correct – there will still be three hours of work to be corrected. This would also enable results for sixth years to be prioritised and issued earlier, solving one big current problem for the State Examinations Commission.

There is another idea talked about for many years, whose time has come – remove the Junior Cert from State certification. The old “inter cert” once served a purpose for early school leavers, but no longer does. Schools can issue their own certification. This would free up significant resources for the Leaving.

We could be braver still and mirror third-level semesterisation. Over the two years have four testing points: December/January in fifth year, June in fifth year and likewise in sixth year.

We live in an information-rich age and need to ask what young people leaving school should know. Can we reduce content in top heavy syllabuses, allowing for learning at greater depth and providing time to stop, think and explore?

At day’s end we need to ask if young people are leaving our schools with a sense of achievement and, as forward-looking global citizens, ready to contribute to making the world a better place.

Unless we help equip young people to fix the broken and existentially challenged world we are bequeathing them, the Leaving Cert will become the least of their problems.