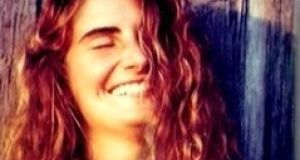 The mother of missing American woman Annie McCarrick has said she has given up hope ever seeing her daughter again, but that her “greatest wish” was to find her remains so she could have a proper burial.

Some 23 years after Ms McCarrick vanished without trace while studying in Ireland, Nancy McCarrick said finding out what happened to her would be a gift for her and the family. “When she found Ireland her whole life really changed,” Nancy McCarrick told RTÉ’s Crimecall programme, which will air a fresh appeal for information on Monday night.

“I know one of the priests at Maynooth said she could lift the spirits of the whole class; that she was that happy to be there,” she said of her daughter’s studies at the time of her disappearance. It’s a terrible loss and it’s been a long time, such a very long time. I’m pretty sure, you know, that I’ll never see her again.

“But I guess my greatest wish would be to be able to take her home. And have a grave that I could go to . . . So to find out what happened to her really would be a great gift at this point. It really would.”

Gardaí believe Ms McCarrick, from Long Island in New York, was last seen in Johnnie Fox’s pub in Glencullen, Co Wicklow, on March 26th, 1993. She had been living in Sandymount, Dublin, and Nancy McCarrick was due in Ireland for a visit just days later.

The alarm was raised when Annie did not show up at a part-time job the following day to collect her wages. She also failed to come to a dinner party.

Ms McCarrick’s disappearance has become one of the most high-profile unsolved crimes in the history of the State. She was one of a number of women who disappeared, presumed murdered, in the Leinster area in the 1990s.

In 1998, the then Garda commissioner Pat Byrne established Operation Trace to investigate possible links between six cases. No links were ever established.

When Ms McCarrick disappeared, the then US ambassador Jean Kennedy Smith made representations to President Mary Robinson, taoiseach Albert Reynolds and minister for justice Máire Geoghegan-Quinn.

There followed one of the biggest missing persons investigations ever in Ireland. However, despite the investigation and an offer of a cash reward for information, nothing has ever emerged to explain what happened to her.

Det Supt Walter O’Sullivan, who leads the Garda Serious Crime Review Team that has examined the case, said the last information the Garda had was that Ms McCarrick was in Johnnie Fox’s pub between 9-11pm on the night she vanished.

He appealed to anyone with information to come forward and help unlock the case. “Annie loved to walk in the village of Enniskerry in Co Wicklow,” Det Supt O’Sullivan told Crimecall. “Investigators know that she took the 44 bus from Ranelagh to Enniskerry at approximately 3.40pm. We are reasonably satisfied that her journey took her beyond Milltown, but did she reach the village of Enniskerry?”

Ms McCarrick was aged 26 when she vanished. Her late father John died not knowing what happened to his daughter.