Of 110 drivers stopped at Garda checkpoint, 26 thought to be linked to sham marriages 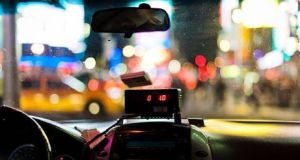 Some taxi drivers were found to be fraudulently claiming social welfare though working. In some cases, on-the-spot fines were issued to other for various breaches of PSV regulations. File photograph: Getty Images

As many as one in four foreign national taxi drivers stopped at recent illegal immigration checkpoints are suspected of having entered into sham marriages, gardaí believe.

During an operation in May, established to coincide with an Ed Sheeran concert in Phoenix Park, Dublin, some 110 drivers were stopped.

Of those, 26 are believed to have paid to marry a woman from Europe they had never met so they could secure the right to reside and work in the Republic, according to gardaí.

All of the men are from outside the EU and gardaí have already revoked the immigration status they had secured when they married European women in the Republic.

The men are now appealing that revocation and are permitted to remain in Ireland until their appeals are completed.

Garda sources said there was concern within the force that such a high percentage of no-EU drivers stopped at three checkpoints during a one-hour operation were suspected of cheating the immigration system.

One man, from India, was about to attend a special citizenship ceremony but that has now been deferred on suspicion his marriage is a sham.

Garda sources said the decision to target taxi drivers specifically so their immigration status could be scrutinised was made after unusual patterns were detected in new public service vehicle (PSV) applications.

“We noticed a big increase in the number of men from outside the EU applying and it wasn’t clear why this was happening,” said one officer.

Another source said 58 new applications for PSV licences were lodged with the carriage office in January, 40 of which came from men outside the EU. He described this as “way outside the norm”.

The same officer said the increases had been a feature for around 18 months. And when some of the applicants’ immigration histories were checked it emerged they had previously tried to secure status in Europe.

It was then decided to target the Ed Sheeran concert on May 18th at three locations close to the park because gardaí knew they could check a lot of taxis very quickly at the same locations before news of the checkpoint locations spread and drivers began avoiding the area.

Some of the drivers were found to be fraudulently claiming social welfare though working. In some cases, on-the-spot fines were issued to other for various breaches of PSV regulations.

However, it was the suspected involvement of a quarter of the drivers in sham marriages that caused gardaí most concern.

Sham marriages are marriages of convenience, normally between a man from outside the EU and a woman from a member state. The so-called brides are usually from Eastern Europe and are paid a fee to marry the men, who secure the right to reside and work in Ireland through their marriage. The Garda’s Operation Vantage has been established with a view to cracking down on the problem.