At least one Irish person has been arrested in Spain after police seized almost seven tonnes of cannabis with an estimated street value of €18 million. 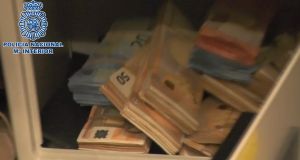 A screengrab from a video provided by Spanish police showing officers opening a safe during a search of one of the properties linked to the gang. Image: Policia National

At least one Irish person has been arrested in Spain after police seized almost seven tonnes of cannabis with an estimated street value of €18 million after dismantling a smuggling ring.

In a statement Spanish police said 11 people - nine men and two women – had been arrested, including British, Moroccans, Spanish and Irish nationals. Police said five of those arrested were either British or Irish citizens.

It is alleged the gang was using boats to import cannabis into southern Spain from Morocco.

Officers say the gang was led by a British person who was using his home in San Pedro de Alcantara near the resort of Marbella to store the drugs.

When his house was raided they seized 150 bales of cannabis, a kilo of cocaine, €208,830 in cash, and a gun with ammunition that was hidden in a double-bottomed closet accessed through a sophisticated hydraulic system, police said.

The police operation also involved searches of four other properties and two storage rooms used by the hang.

During these searches police said along with the seven tonnes of cannabis they seized cocaine, ecstasy, cash including euros, sterling and Moroccan dirhamns; a gun, nine vehicles, 25 mobile phones, a frequency jammer and two vacuum packaging machines.

The operation started in March when police learned about the smuggling network.

In May police tried to stop a van which they suspected was carrying drugs. This suspect rammed several police cars in a bid to escape but was subsequently arrested.

The van was found to contain 35 bales of cannabis.

This led police to identify and arrest other members of the group and the operation concluded in recent days with the final four arrests.