In the ICC, male judges outnumber females by 11 to six but women are now taking on influential positions 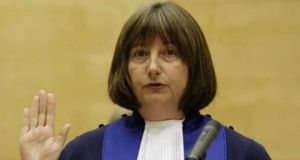 It is symptomatic of the low profile kept by the International Criminal Court (ICC) that even what might be regarded as a landmark event and a positive one too for women – the election of the first female president in its troubled 12-year history – passed with hardly a murmur.

As Judge Sang-Hyun Song (73) of South Korea stepped down earlier this month after six years in the job, he was replaced, not by another man in an institution where male judges outnumber females by 11 to six, but by Judge Silvia Fernandez de Gurmendi (61) of Argentina.

The election of Judge Fernandez “marks a significant step forward for the proper representation of women in the top ranks of international justice”, according to Dr Kelly Askin of the Open Society Justice Initiative.

With the ICC regularly lambasted as too slow and expensive, with links to the UN Security Council that have arguably “politicised the pursuit of international justice”, as Dr Askin puts it, the new president has all the leadership qualities needed to help it leave those “awkward growing pains” behind.

If she is correct, there has never been a better time for women to make their mark at the ICC. Not just its presidency but four of its most influential legal positions are now held by women.

“Strong judicial leadership is indispensable in building a sustainable, credible, court,” observes Askin, author of War Crimes against Women – Prosecution in International War Crimes Tribunals. “Women in top positions in other international courts have often proved to be the most effective advocates and managers.”

The new ICC president is steeped in the law, although after degrees in Cordoba and Limoges and a doctorate at the University of Buenos Aires, she trained as a diplomat and her first job was with the Argentinian diplomatic service.

She rose to become director-general for human rights at the foreign ministry, and it was that job which, in a sense, led her full circle, becoming involved in the preparatory committee set up at the United Nations headquarters in New York in 1996 to work on a draft statute for the establishment of the ICC.

When the fledgling court opened its doors in The Hague in 2002, it was natural that she should become involved, working initially as chef de cabinet to its first prosecutor and her fellow countryman, the aforementioned Luis Moreno-Ocampo.

She was named a judge in 2010. She has regularly issued dissenting or partially dissenting opinions in high-profile cases, including opposing the opening of an ICC investigation in Côte d’Ivoire in 2011. Legally, say insiders, she is very much her own woman.

Women have presided over international courts before, of course. Dame Rosalyn Higgins was the first female judge elected to the International Court of Justice – the UN’s main judicial organ, also located in The Hague – and was its president from 2006 to 2009.

At one point, the ICTY had Gabrielle Kirk McDonald as president, Louise Arbour as chief prosecutor, and Dorothee de Sampayo Garrido-Nijgh as registrar. Although even so, men still far outnumbered women on the judges’ benches.

“The importance of having women in these leading positions is evidenced by the fact that some issues to do with gender violence have only come to the forefront in decisions influenced by women such as Navi Pillay,” says Dr Cassandra Steer of legal blog, IntLawGrrls (ilg2.org), ranked in the top 25 law professors’ blogs.

“During her time at the ICTR, it was the attention she paid to evidence being presented about acts of sexual violence targeting Tutsi women that led to the inclusion of rape as an act of genocide in the well- known Akayesu judgment.”

Interestingly, the ICC marked International Women’s Day earlier this month by reaffirming its “commitment to accountability for perpetrators of sexual and gender-based crimes.”

It will be interesting, too, to see if, with more women at the helm, the lives of the ICC’s top judges become less isolated, a particular problem when they are living outside their native countries.

In a rare insight, outgoing president Judge Song said of his time in The Hague: “I have been very lonely here. I don’t talk to people. I play golf alone or sometimes with my wife. I don’t want to give people the wrong impression.”