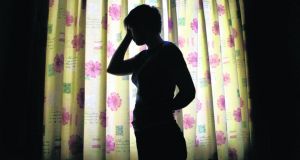 Most recent figures show almost one in four of the 134 people trafficked into Ireland for sexual exploitation in recent years were children. Photograph: Niall Carson/PA Wire

A new campaign to highlight how young girls are being trafficked and forced into prostitution has been launched.

“Real Men Don’t Buy Girls” is the message of the social media campaign by the Immigrant Council of Ireland (ICI).

Most recent figures show almost one in four of the 134 people trafficked into Ireland for sexual exploitation in recent years were children.

Denise Charlton, ICI chief executive, said there is never any excuse for buying a girl, either here in Ireland or when travelling abroad with friends.

“The message of the campaign could not be clearer and reflects what we know most men believe, ‘Real Men Don’t Buy Girls’,” she said.

“As a frontline agency we know that girls and young women are often being tricked into coming Ireland - only for the grim reality of their situation to dawn when they are picked up at Dublin Airport and forced into a life of selling their bodies.

“This is something no brother, young father or any man should find acceptable.

“Through this campaign we hope to get young men to reflect on this and ensure they are fully aware of the reality behind trafficking. ”

Several high-profile men, including broadcasters Daithi Ó Sé and Ray Foley and comedians Bernard O’Shea and Eric Lalor have backed the cause, which aims to make young men aware of trafficking both in Ireland and abroad.

Mr Ó Sé said there is no acceptable level of sex trafficking.

“We know already that this is a crime which is a modern-day scourge and something which real men will never tolerate,” said the RTÉ presenter.

“Whether away for a music festival, sporting event or on a stag party abroad there is never an excuse for buying girls.

“We must ensure that there is no safe haven for traffickers and organised criminals who line their pockets by trampling on the human rights of women and girls.”