BMW's grand plan: A revolution is under way across the auto industry 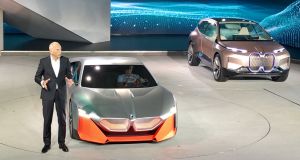 Pieter Nota, BMW board member in charge of sales: “For us the road is not to force certain technologies through – it’s more about the end results environmentally, it’s about clean air.

This is a mammoth car showroom, attracting three million visitors a year to see the latest cars on sale and a few concept visions of the future. There are no rollercoasters, no stage shows, just a parked cars and expensive merchandise.

It’s a baffling lure to those who haven’t been, but it’s a benchmark for every other global brand out there.

Yet, the car brand’s executives know they cannot rest on their laurels, especially right now. A revolution is under way across the auto industry, both in terms of what powers the next generation of cars, who owns them and how they will be driven.

BMW’s board knows that it needs to keep pace with rivals if it wants to prevent the Welt becoming merely an offshoot of its historical museum across the road, a tribute to the cars of the past. That’s what is driving its latest big strategy plan, #NextGen.

It did seem as if the bosses at BMW were listening in on last week’s Climate Action Plan presentation where the Irish Government set a target of 950,000 electric vehicles on Irish roads by 2030. The German premium car giant is planning to offer more than a dozen fully-electric vehicles by 2023, part of a move to have 25 electrified vehicles – fully electric and plug-in hybrids – on sale by then. This is two years ahead of the initial plans by the group, which also owns the Mini and Rolls Royce marques.

According to Harald Krüger, chairman at BMW Group: “We are moving up a gear in the transformation towards sustainable mobility, thereby making our company fit for the future: Over the past two years, we have consistently taken numerous decisions that we are now bringing to the roads.”

The new strategy heralds the long-awaited arrival of some new fully-electric models to the car giant’s portfolio. While its sole fully-electric model, the i3, has been doing well since its launch six years ago – with more than 150,000 built to date – rivals are now pushing forward with a wider range of models.

Audi recently introduced its E-Tron crossover to the market, while Mercedes-Benz will have its EQC fully-electric crossover on sale in the coming months. Both are due to be joined by several other fully-electric models ranging from saloons to sports cars in the coming months. Indeed, on the morning that BMW unveiled its NextGen strategy, Mercedes confirmed that yet another of its new models, the new small GLB crossover, will be offered as a full-electric vehicle.

Suddenly BMW, which had a strong lead six years ago, seems to be facing tough competition from old rivals, never mind the likes of Tesla. The so-called #NextGen plan unveiled by Krüger and his team is meant to rectify this situation.

That means BMW’s i3 will be joined later this year by the fully-electric Mini, built at the company’s plant in Oxford. It will be followed next year by a fully electric iX3 crossover, built in China. In 2021 BMW will add the larger fully electric SUV, the iNext, and the i4 electric coupe, built in Munich. Other EV models will follow but the company will not confirm what these will be as yet.

Alongside these will be a host of plug-in hybrid variants of its current range, including 3-Series, 5-Series, X3 and X5. It is also introducing a new system called eDrive zones. Developed after a pilot project in Rotterdam, the car recognises “green zones” set out by local councils solely for electric vehicles. When the hybrids enter these areas, identified using geofencing technology, they will only run on electric power.

Yet, if the Irish Government’s plan is to be realised, then all these hybrid models will be banned from sale come 2030.

Pieter Nota, BMW board member in charge of sales, warns against such a radical move. “For us the road is not to force certain technologies through.

“We don’t support any drivetrain-specific bans and we wouldn’t recommend that,” he tells The Irish Times. “We advocate technology openness, and we see ways to reduce CO2 emissions significantly in other drivetrain set-ups (like petrol hybrids). In this case our portfolio will be able to cater to such markets, but I would not recommend it. Highly efficient hybrids will be part of the future.”

There were stronger words from BMW’s head of development, Klaus Frölich, who says that internationally “there are no customers; [no] requests for EV”.

“If we have a big offer, a big incentive, we could flood Europe and sell a million cars but Europeans won’t buy these things,” Frölich says after an online Twitter debate with the head of environmental lobby group Transport and Environment.

“What they [Transport and Environment] ignore is that the European customer is not prepared to take the risk on an EV because the infrastructure is not there, resale is not known.

“Customers in Europe do not buy EVs. We pressed these cars into the market and they’re not wanted,” says Fröhlich. “We can deliver an electrified vehicle to each person but they will not buy them.”

“You change the customers with incentives, not by changing the cars. In Munich it’s 50c per kWh and a four-cylinder diesel is cheaper to drive than an EV. It’s below 20c per kWh in France. ”

He also dismissed accusations that carmakers were too slow to react to the EV push in Europe, particularly. “I think we are coming at the right time because we don’t have enough consumers who buy these cars. We need €70,000-€100,000 and this is not the market segment where you can make volumes.

“You have to pay for range, this is what people don’t seem to understand,” he insists.

“All this range discussion is complete bulls**t because it’s an economic proposition of how much you can afford.”

BMW considers itself to be five years ahead of other European brands in EV development, and Frölich himself headed up the initial strategy investigations into EVs.

“If we charged the customers for that cost, we would have downsizing with customers going from a 3 Series to a 1 Series customer.”

The NextGen event featured six world premiers, with debuts for the new 1 Series, M8 and two concepts. One of the new concepts on display is a stunning new sports car, the Vision M Next. Heavily influenced by the company’s classic M1 sports car of the 1970s, it is still only a petrol-hybrid car rather than a fully electric model.

However, as Krüger made clear, the launch event this week is more than a product show: “It’s how we see the future.”

Part of that is a promise that for the fifth generation of its electric drivetrain architecture – due to underpin the i4 in 2021 – a top range of 700km between charges will be possible, while it will be developed without the use of rare metals, an issue that’s increasingly causing concern due to the rapid growth in electric car sales. -