14: Toyota C-HR – So good it could easily carry a Lexus badge 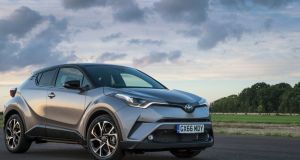 Toyota’s sharply-styled crossover (technically called the Coupe-HighRider) continues to impress even though it’s already old enough to be getting a mid-life update.

That update doesn’t change much on the outside (bar a nip here and tuck there) but it does mean it gets the option of the same 2.0-litre 180hp hybrid powertrain as the Lexus UX, and at long last the infotainment system has been upgraded to 21st century standards.

What we really like about the C-HR, though, is that it’s a rare crossover that doesn’t feel built down to a price. It’s sparky and agile to drive, and has an interior with the kind of comfort and quality to really show up most of its opposition.

In the debit column, it’s compromised in the back seats for space and visibility, and the boot is quite small. We’ll forgive it those foibles for its entertaining driving experience, though. The impressive 1.2-litre petrol turbo engine is about to be dropped which is a shame, leaving only hybrid models in the lineup.

Sum up: Riding high in our estimation