Cahore harbour, near Gorey, Co Wexford, is a one-pub village - and now the pub is for sale 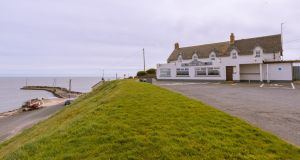 The good weather has brought out a warm sunny side in Wexford estate agent Adrian Haythornthwaite. He’s waxing lyrical about a residential pub in Cahore, an old-fashioned bucket-and-spade resort outside Gorey where children hang over the edge of a little bridge baiting crabs with bacon at the end of their fishing lines.

“God help any parent who drives all the way down here and forgets the packet of rashers” says Haythornthwaite, who grew in the neigbhbourhood and who is now selling the Strand Bar, the village’s one and only pub, for €700,000. The pub and six- bedroom residence standing on a prominent seafront site has spectacular sea views and sells a “a massive amount” of Guinness in the summer season.

The Horgan family have run a pub here since 1939 and the current owners, Lester and Margaret Horgan are planning retire to a smaller house in the village once a buyer is found. Apart from the mushrooming of holiday cottages in the area, Haythornthwaite believes that not a huge amount has changed in Cahore since the last century. “The clock has stopped in Cahore, it’s the place that time forgot.” he says, pointing to the lack of other tourist developments in the village and the potential for it to to grow, now that the area is so much more accessible from Dublin. “I remember a time when it took three hours to get to Dublin airport,” he says. “Now it’s an hour and 20 minutes away and getting closer with road improvements.” A short drive across country links the village to Cahore Strand, a spectacular stretch of beach that is often deserted.

The pub is being sold as a going concern, following an attempt to sell it last year. Several bidders chased it last June after it was withdrawn from auction but interest died down in the autumn and is now reviving with the good weather says Haythornthwaite. It had been asking €600,000 last year. The new price reflects the uptick in the economy and the steady interest in the property, mainly from young couples already in the catering business and looking to develop the menu, which is currently heavy on fish and chips.

Cahore is reached at the end of a long winding road that leads from Ballygarett village and ends in a harbour just below the Strand Bar, which is the centre of village activities. There is no shop or other food outlet. Holiday homes ring the little bay and are dotted along a higher headland above the pub.

“There are three good things about the location – the pier, the chimneypots and what we like to call “the Wedge Factor” says Haythornthwaite of Sherry FitzGerald Haythornthwaite. All are good for business, he says: the pier is one of just eight on the Wexford coast and ensures a steady stream of business from boats. The chimney pots represent the big hinterland of holiday homes in an area, the third, the “Wedge” is the amount of holiday money people bring to the area which they’re determined to spend.

“Everyone in commercial life in Wexford has an intrinsic understanding of the Wedge Factor. It’s what makes people buy beach balls and fishing nets and ice creams and a pint that they can enjoy in the sun without the hassle of the going abroad.”

The property includes the 494 sq m bar and residence, several outbuildings, a large walled garden incorporating a turret outlook, parking and a wide area of lawn that slopes down to the harbour front . There’s plenty of scope for development though as with all coastal properties of this kind, the market is strictly seasonal.