Print-maker Cliona Doyle draws inspiration from the nearby Botanical Gardens 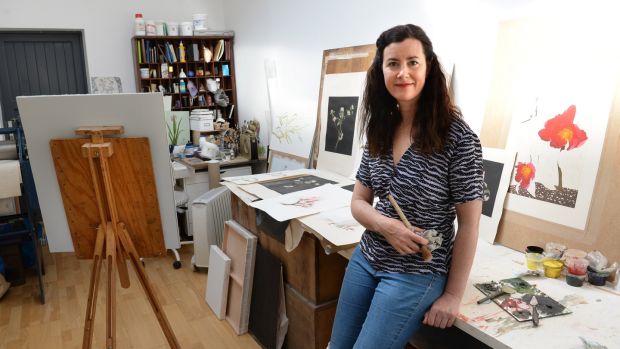 Artist Cliona Doyle has been in residence at number 10 St Brigid’s Road Upper in Drumcondra since 2005. Trained at the National College of Art and Design, she specialises in botanical print-making and etchings and has exhibited her work at the National Gallery and the Chester Beatty Library, and is in their collections as well as that of the Merrion Hotel.

She also works from home in a studio that she built in the garden, a space where the mature planting, which includes a fig tree, cherry blossom, camellia, raspberry bushes and apple tree have all inspired her work. “I draw outdoors when I possibly can,” she says, and has been known to go up the road to the Botanic Gardens with a copper plate for her etchings under her arm. During lockdown she started to experiment in painting with tempera.

The garden extends to about 20 metres and the cedar-clad studio has a lantern roof light, shower room and separate laundry room and offers a further 30sq m of living room to that of the main house. It also opens directly out to a gated lane to the rear that has vehicular access.

The road is one of the residential redbrick-lined streets secreted off lower Drumcondra’s main drag that is also accessible from Whitworth and Iona roads.

The box-bay fronted residence has good ceiling heights and opens into a hall painted in Farrow & Ball’s Babouche. It’s a cheery shade. “It’s very difficult to get a nice shade of yellow,” she says, leading the way into the interconnecting reception rooms where there is smart coving and a set of fold-back doors leading from the front living room to a second sitting room to the rear.

The house also has its original four-panel doors and shutters on the window overlooking an enclosed courtyard where there is a thick planting of bamboo. Doyle’s work hangs on the walls and in the L-shaped, eat-in kitchen, which has painted duck-egg blue units and a living area that opens out to a small brick patio.

Her work also hangs on the stairwell, which leads up to the return and the first of the house’s three double bedrooms. The family shower room is here too, with two further doubles on the first floor. The main bedroom runs the width of the house and she has converted the attic to give a home office at the top of the house, far away from busy family life.

Situated north of the railway line you can hear its heavy engine sounds groaning every time the commuter service from Maynooth chugs past. While the area is well served by bus and rail she’s moving across the city to be closer to her daughters’ schools.

Across the street is number 15, a similar style of house, albeit slightly smaller at 106sq m (1,143sq ft), without an attic conversion and laid out as a two-bed. It is asking €595,000 through agent Sherry FitzGerald.