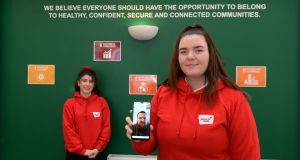 Caitlin Somers sits in the YMCA on Aungier Street, Dublin 2, chatting with me on a WhatsApp group call with her mentor Paul Keegan, who is self-isolating due to being a close contact of someone who tested positive for Covid-19.

A confident young woman now, Caitlin has turned her life around following a dark period after her friend died by suicide two years ago. “When I first joined the YMCA programme I had a negative mindset. I was sad because my friend died. I didn’t want to do the programme. I didn’t want to meet people I didn’t know but now I’m more open and happy within myself,” says the 18-year-old who lives with her mother and older brother.

The group mentoring programme at the Margaret Aylward Community College in Whitehall, Dublin was set up to support five teenage girls following the death of one of their classmates by suicide in 2018. At the time, the school’s guidance teacher was on maternity leave and the YMCA mentors came to meet the girls every week to support them through their traumatic experience.

“It takes a lot of courage to talk about how you feel. We connected with them and gave them a chance to vent if they had a bad day,” says Keegan. As well as the in-school meetings, the group also went out on trips before the pandemic hit. During lockdown they continued to support each other via Zoom calls.

The PlusOne mentoring programme is offered on a one-to-one basis and to groups by the team at the YMCA on Aungier Street. The young people aged between 10 and 17 are referred to the trained volunteer mentors by schools, Tusla, An Garda Síochána and other youth services. Founded in Scotland in 2009 and well established in other countries, it began in Ireland in 2018.

Research from the University of Dundee in Scotland found a high reduction in offending behaviour among participants. “Eighty-six per cent of those who partook improved their behaviour and 64 per cent improved their skills, talents and relationships – becoming a positive influence in their neighbourhood,” says Keegan.

One of the highlights of the programme for the students of Margaret Aylward Community College was a wellbeing day the girls organised. “We had mindfulness colouring in, relaxing music playing and every student in the school got time in that room during the day. It brought a lot of positivity to the school,” says Caitlin who is now in her Leaving Certificate year.

Caitlin feels that she has matured a lot through her involvement with the programme. “I’ve learned how to cope with and manage my emotions. I’ve learned that there will be things that set you back and that not everyone will be in your life forever,” she says. “My mam says that I’ve come out of my comfort zone and I know who I am now and what I like and what I don’t like.”

Keegan says that he noticed how the group developed strong leadership skills throughout the year. “The big thing with this programme is that it gives young people a safe space to articulate their feelings,” he says.