Yoga v pilates: which one is best for you? 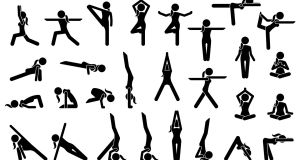 Yoga may have taken 5,000 years to evolve into a western phenomenon, but its 21st-century profile has rocketed at lightning speed.

In the US, the number of practitioners has doubled in just a few years, reaching 37 million in 2016. The global market is estimated at €70 billion.

Increasing stress levels, coupled with a greater focus on physical health and wellbeing, are cited as factors in the growth of both, as well as celebrity endorsements – Madonna and Geri Halliwell have long sworn allegiance to yoga, while Beyoncé and Emma Stone fly the flag for pilates.

But despite the longevity and global popularity, confusion persists about yoga and pilates, compounded by the increasing variety of classes offered in each discipline. Ashtanga, iyengar and vinyasa are all considered relatively modern incarnations of yoga; inevitably new variants of pilates have sprung up, too, as the market has become more commercialised.

One of the newest members of the British royal family,Meghan, Duchess of Sussex, whose mother Doria Ragland is a yoga teacher, is a fan of Megaformer – a souped-up version of reformer pilates – while gyrotonic yoga is credited with helping Andy Murray with his longstanding back issues.

Teachers of both yoga and pilates say they are routinely asked to explain the difference between them. “The simple answer is that they’re both low intensity, low impact and inclusive, unlike many other forms of exercise,” says Prof Greg Whyte, a former Olympian and now leading authority on sports science. “Generally speaking, yoga is much more about flexibility and stability, pilates is strength and stability.”

But, for every flashy gym offering yoga classes to burn calories and sculpt bodies, there are many more teachers committed to its traditional spiritual principles.

Yoga was originally practised by holy ascetics in India, its aim to focus the mind, connect with a higher consciousness and, through this newfound compassion, end suffering in the world. For Lily Silverton, a fashion editor turned yoga teacher, it is a way of life that demands she practise social value. “I strongly believe that in yoga, you’re in service,” she says, giving as an example her voluntary work with mental-health and refugee charities, homeless people and children with special needs.

Jonelle Lewis, a recent Om Yoga magazine cover star, describes teaching yoga as a form of stewardship. “These are not my teachings,” she says. “These are lineage teachings that we have the honour to pass on to people.”

Although pilates is not a spiritual pursuit, its origins are rooted in healing and rehabilitation. Its German inventor, Joseph Pilates, relocated to England in 1912 and, as war broke out, was interned with other Germans working in a hospital on the Isle of Man. It was here that he invented the beginnings of his reformer, cadillac and chair equipment, using springs to help bed-bound patients develop their muscles.

That tradition continues to this day.

Laura Browning Grant, a pilates teacher in North Carolina, gained a huge following on social media for using pilates techniques to rehabilitate her husband, Jonny, a former Navy Seal who suffered a traumatic brain injury in a car crash. Grant has written about the power of pilates for both physical and mental wellbeing. “I have worked with individuals that have experienced trauma, causing emotional and physical damage,” she writes. “Using the pilates method, many were able to regain a sense of balance in their life.”

Suzi Power teaches yoga and pilates at the community studio East of Eden in London, and sees the benefits of both. She advocates pilates as a safer option for those prone to injury, or those who are exploring this type of exercise for the first time. “I trained in yoga first, but I was drawn to pilates reformer because I had a yoga injury. Pilates helped me to rehabilitate.”

Yoga uses the body to connect with the mind and the inner self, while pilates uses mindfulness to connect to the inner workings of the body. “I practise both and love both – I think they complement each other well,” says Lottie Murphy, a former ballet dancer, now pilates teacher. “The main difference is the focus on the spiritual element in yoga. Some of the actual poses are similar – in pilates, we do the elephant, which is basically downward dog, and also backbends. It’s just that in pilates, we tend to build up to some of those moves more slowly than you might in yoga.”

Be warned, however, the more dynamic forms are not recommended for beginners. “They move very quickly, so there’s potential for damage to joints,” says Silverton. “Both pilates and yoga target muscle groups that you won’t access in many other forms of exercise. You can be an incredibly fit runner or boxer and come out of a yoga or pilates class in agony because you’ve worked muscles you don’t usually engage.”

As the skinny, immaculate white women who pop up in a Google image search go to show, the stereotype is that yoga is squarely aimed at those with privilege. Lewis, a rare woman of colour in the industry’s spotlight, is understandably frustrated that the practice’s roots in Indian spirituality have been all but erased from its public image. “Yoga is for everyone,” she says. “I don’t know a single person who wouldn’t benefit from being able to breathe more deeply, have more mental space and put ease into their body. But you look in the media, or go into a yoga studio – even in London – and it’s all vanilla.”

When professional athletes come to Whyte asking about yoga and pilates, which discipline does he recommend?

“Often I suggest a combination of the two. Pilates has become the mainstay of rehab, particularly for back problems. But it’s also great for other conditions, such as urinary incontinence. You’re focusing on the core, whereas yoga tends to be more the whole body.

“Both are great in pregnancy, although the key advice to remember is that pregnant women should look to maintain fitness, not improve it. Maintenance of range of motion is fine; overstretching is problematic.”

If you are hypermobile – that’s when joints stretch further than they should – the consensus is to try pilates first, and to approach yoga with caution. “You can do yoga and be hypermobile,” says Silverton, who is hypermobile herself; “You just have to be very careful. Let your teacher know, don’t push to your maximum, and keep a microbend in the knees and elbows when you practise.”

Ultimately, it might just be down to personal preference. Power says the choice is as much in the mind as the body. “People who are more logical tend to like pilates, creative people tend to like yoga. My partner is an accountant and he can’t stand yoga – it’s too hippy for him – but he likes pilates.