Fighting arts: Tell me about . . . Ninjutsu 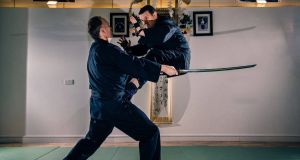 Alex Meehan teaches Bujinkan Budo Taijutsu, also known as Ninjutsu, in Harold’s Cross, Dublin at the Bujinkan Namiryu Dojo. He has been practicing the art for 30 years.

Where does Ninjutsu originate?

It’s a Japanese martial art, but even in Japan it’s an unusual one. Best known as the art of the ninja but most people don’t understand what ninjas were. The historical role of a ninja is a particular kind of soldier - sort of the special forces of their time, they specialised in information gathering and intelligence - they understand how to infiltrate enemy lines and how to record troop movements, this was the sneakier end of warfare.

In 2019 the martial art we practice, we do the actual physical punching, kicking and using weapons that these guys would have trained in to augment their espionage - we don’t do any sneaking around or wearing of hoods or anything like that, much to my inner fourteen year old’s disappointment.

A bit of a niche art, it has gone through various stages of popularity. In the 1980s there was a ninja boom. I remember as a kid you could go in to Eason’s and there was two or three magazines dedicated to ninjutsu, obviously the world moved on and other martial arts have come and gone.

At the moment there are a couple of hundred people practicing in Ireland and there are approximately half a million people around the world doing it.

What is the main focus of Ninjutsu?

If somebody comes to a class what they could expect is to learn physical self defence skills that come from the battle field techniques of the samurai, that is the long and the short of it. We practice tumbling on the ground, how to fall and land safely, punching and kicking and how to generate force, efficient movement, how to make the most of your body mass. We talk about the need to use the whole body instead of just parts of it.

We have what are called kyu and dan ranks. Starting with 9th kyu which is the first belt people get - it takes about five years to get to black belt then you transition to dan grades, the top rank is 15th dan. Most martial arts don’t go that high but we do and the other thing that is unusual about it is its designed to be achievable. Most martial art’s top rank is nearly a mythical position, its designed to be unachievable. In ninjutsu it’s achievable if you stick around and you’re dedicated and train hard, anybody can achieve the top rank.

There are clubs all around the country, there are people who are students of mine who have dojos in Kerry, Cork and Dublin. There are other clubs run by other teachers, some in Galway, in Athlone and there’s some up north so it’s spread fairly evenly. The thing to watch out for is to just make sure that the teacher has a good strong connection to Japan, it’s a young martial art in Ireland so make sure the person has the right qualification and is dedicated themselves.

I know it’s a cliché to say that it can benefit everyone and every martial art would like to say that but I think we have a fairly unique claim on it because its an art which adapts to the age and the physicality of the person, in the beginning we do spend time learning how to fight and that is a physical process so dealing with violence is a physical and demanding process however the art element of it is something you can practice all your life.

You get flexibility in your body and you get flexibility in your mind I think if you look around people in there 40s, 50s, 60s its easy to see people who don’t do martial arts, they almost start to solidify in their thinking, they are slightly more routine dependant in their lives and martial arts is literally a kind of way to keep your brain young, to keep you playful and keep you engaged in life.

It’s really safe, I mean it is a physical activity, it not possible to study fighting without there being physicality involved but a dojo club that is well run will never ask anybody to do anything that is outside their ability that pushes them into an area of danger. We’ve got a really good safety record in my club, occasionally injuries happen but it’s really rare.