Do you have breakfast before your morning run?

Some avoid eating before going out; others load up the calories. So who is right? 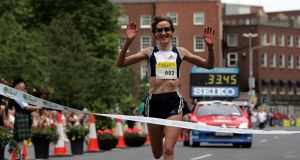 Runner Catherina McKiernan is a fan of breakfast before a tough session. Photograph: Eric Luke

Although breakfast is a likely source of pre-exercise nutrition in the morning, it’s often omitted by young females, says Rachel Veasey of Northumbria University’s Brain, Performance and Nutrition Research Centre. “Reasons given by active females for skipping breakfast before morning exercise include both lack of time and discomfort during exercise.”

Since many females exercise to lose weight, they may avoid breakfast to increase weight loss, she said.

“Also, women may be more sensitive to mood and appetite changes than men and could be more likely to skip pre-exercise breakfast,” she added.

Higher energy intake at breakfast was associated with lower fatigue

“Our study demonstrated that consuming a cereal breakfast before a morning run can increase feelings of relaxation and reduce appetite for a short while post-run when compared to consuming no breakfast,” said Dr Veasey.

“However, the study only included females who habitually consumed breakfast a short while before exercising; individuals who need to run on an empty stomach to avoid digestive discomfort may find they’re able to consume a small, low-calorie breakfast pre-run to gain similar benefits. Further research is needed.”

The sooner you are going to eat before exercising, the smaller and simpler the meal should be, according to Conor Kerley, a dietician and chairman of the Scientific and Research Steering Group of the Irish Nutrition and Dietetics Institute.

“Fruit with either some nuts or wholegrain cereal or bread is ideal. Most fruits are more than 85 per cent water; provide carbohydrates, vitamins and minerals; and are low-fat for quick digestion,” Dr Kerley said.

“If time’s limited, dried fruit such as raisins and sultanas are a good choice. Studies in the Journal of Strength and Conditioning Research show that raisins work as well as expensive and less healthy sports drinks or gels.”

Dr Kerley, who is also a post-doctoral researcher at the Heartbeat Trust and Dublin City University, added: “During high-intensity exercise muscles use carbohydrates for fuel.

“This carbohydrate derives from your body’s stores, the foods you eat, or both. Therefore, consuming carbohydrate is important before prolonged exercise (over an hour).

We burn more fat and less carbohydrate during the exercise

“Consuming protein-containing foods before and/or after exercise helps promote muscle growth and repair, plus improve recovery. The type and amount of foods to eat before exercise depends on the type, duration and intensity of each exercise session as well as the individual.”

According to Javier Gonzalez, a lecturer and assistant professor in human physiology at Bath University in the UK, exercising before breakfast increases our reliance on fat as a fuel, so we burn more fat and less carbohydrate during the exercise bout.

“For example, if we burn more carbohydrate during exercise, we could be prone to eating more food after exercise, so this is an area of ongoing research.”

Research by Dr Gonzalez’s team suggests that if you exercise before breakfast, you don’t compensate for the additional fat burned for at least up to 24 hours after the exercise bout, so it may be a way to assist with weight loss when combined with restriction of food intake.

“Another potential benefit of pre-breakfast exercise is that we can stimulate more adaptations by training in this way,” he said. “When we exercise, our muscles adapt as we get fitter. Studies indicate that by restricting our carbohydrate intake until after exercise sessions, we can increase the rate at which we adapt to exercise.”

“I did this so that my body adapted to burning fat. On my other runs I had breakfast. I’d advise having breakfast before a tough session. Muscle and liver glycogen are crucial energy sources that fall overnight,” she said. “Breakfast tops them up. Also, you’re unlikely to overeat later in the day.”

“I start with a glass of warm water and lemon juice, then two ripe, peeled pears. Ten minutes later it’s more fruit, like kiwis, grapes and blueberries. After another 15 minutes it’s porridge with milk, adding sunflower, pumpkin and chia seeds, maple syrup, cinnamon and cream. I can run within an hour of breakfast, but if I’m racing I’ve breakfast three hours beforehand.”

“Generally if I’ve an easy run in the morning I’ll have breakfast later,” he said. “This is typically most of the week as my harder sessions are in the evenings. Running before breakfast means I’m straight out without having to digest food.

“That said, however, I always eat well the night before, and never go to bed hungry. But before a hard interval session, long training run or race I’ll always eat something: generally a bowl of wholegrain-style cereal with milk and honey, and a small black coffee. For my post-morning run breakfast I’ll have cereal, coffee, plenty of water, and sometimes brown bread and jam or eggs.”

So, while we may vary the timing of breakfast, runners should not exclude it.

What to eat one to two hours before exercise: