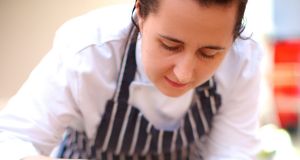 A planned protest at the absence of women chefs on the panel selected to cook at the annual Restaurants Association of Ireland awards dinner in Dublin on Monday night, has been averted.

Hilary O’Hagan Brennan, executive chef and co-founder of Athrú, the Irish movement founded last year to empower women in the culinary arts and address gender imbalance in the industry, said that 24 hours after the group had sought support through social media for a protest, they received an email from the RAI inviting them to a meeting to discuss the issue.

The protest was to have taken place at the Clayton Hotel in Dublin 4, where more than 900 guests will attend an awards ceremony and six-course banquet on Monday night. It had been intended “to highlight the fact that we reject the all-male panel”, O’Hagan Brennan said.

“We had plenty of people prepared to come and support us on Monday, both men and women,” O’Hagan added.

“I don’t know if they’re just trying to get through the awards without any kind of hoo-ha, but we’re happy that they are prepared to meet us, and for us, that is the main criteria here. We are hopeful that their reaching out to us is genuine and they really want to make some changes.”

Adrian Cummins, chief executive of the RAI, said on Friday that he was unaware of any planned protest.

“When the publicity kicked off during the week, I reached out to the organisation that advocates for having more female chefs in the kitchen. They’re trying to do good work there, and I’ve asked them to a meeting and they are delighted to come and meet with us in the next couple of weeks; as soon as possible.”

Cummins said that more than 900 tickets had been sold for the industry event, and that to date he had received no cancellations.

In a statement issued by the Irish Restaurant Awards earlier in the week, signed by Cummins, the process behind the selection of chefs to cook at the annual industry event was outlined.

“The Irish Restaurant Awards 2017 chef team is selected based on those who were regional Best Chef category winners in 2016 for Ulster, Connaught, Leinster, Munster and Dublin. This has been the selection process for the past nine years of the Irish Restaurant Awards. If a regional winner is unable to partake in the chef team, a county winner in the Best Chef category of that region is asked to be part of the chef team.

“There were no female winners in some regions and in the region where there was a female winner, unfortunately she had to pull out of the team in the past four weeks.”

Áine Maguire, chef/proprietor of The Idle Wall restaurant in Westport, won best chef in Connaught last year and was invited to cook at the awards this year. “I was asked to be in the original line up of chefs and I initially accepted, but in early April, I pulled out when I realised it clashed with several events we are doing,” she said on Friday.

Jess Murphy, chef proprietor at Kai Café Restaurant in Galway, and another founding member of Athrú, cooked at the event last year having been voted best chef in Connaught, and in 2015 the Ulster winner, Danni Barry of Eipic in Belfast, was asked to be on the chef team, but had to decline due to prior commitments.

Gary O’Hanlon, who offered to step down and give his place to a female chef, said: “I’ve cooked at the dinner once before and had a fabulous time (after the graft of feeding 1,000 people was done). When was asked again this year, I asked who else was cooking. Áine Maguire was on the team, but I never looked at her as a female. I asked who the other chefs were and Áine, at that time, was the only one confirmed. She then pulled out, and again I paid no heed. Everyone is there on merit and now it feels as if we are responsible for this.”

O’Hagan Brennan was keen to make the point that no blame attached to those chefs who took up the invitation to cook at Monday’s event. “We respect all of the male people on they panel and we think they’re fantastic chefs,” she said.

Adrian Cummins said that the chefs cooking on Monday will be encouraging the female chefs who work with them to be part of their support teams.