It was the year Irish restaurants shut their eyes tight and really wished they could be in Brooklyn but amid the aching coolness of it all, we find the best restaurants and dishes of the past year 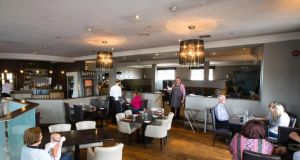 Restaurant of the year: Harry’s Restaurant and Bar in Inishowen, Co Donegal 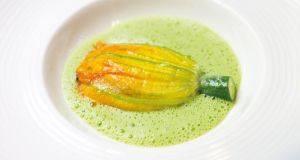 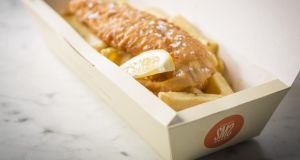 Of all the bare-bricked and filament-bulbed gin joints in all the world – I’ve walked into more than my fair share in 2014. It was the year that Irish restaurants shut their eyes tight and really wished they could be Brooklyn coffee houses.

The demand for subway tiles, meat hooks and bulbs caged in chicken wire has hit such a peak that abattoir and urinal fitters may have to resort to minimalist finishes in the birthplace of the look. Then it’s only a matter of time before magnolia, or Udder’s Aureole as Farrow & Ball will call it, becomes a thing. Trust me.

The year of derivative decor did not always make for brilliant dishes. Lots of ambitious menus slipped down the gap between paper and plate. There have been so many mid-range restaurants opened in recent years that the talent pool of chefs seems to be drying to a thimbleful. It doesn’t help that one of the country’s main chef training courses was axed several years back.

Nonetheless 2014 was a year of many brilliantly memorable mouthfuls. Ireland’s restaurant scene has weathered a crippling recession. Some sectors – yes I’m looking at you, the Dublin mid-range restaurant scene – have thrived.

The Irish restaurant is in ruder health than the Irish pub and there’s a lesson there. Feed us well or die.

The standout mouthful wasn’t in a restaurant in 2014, it was at the kitchen table of chef and Irish Times food writer Domini Kemp when we ate freshly-killed Lough Neagh eel as part of the RTÉ radio series History on a Plate. It’s an ingredient that you’re more likely to find in Amsterdam, London or Berlin than Belfast, Galway or Dublin. But when food like Lough Neagh eel is widely served around the country we stop trying to ape New York or Paris and become uniquely and brilliantly ourselves.

Here are my Restaurant Oscars for 2014: 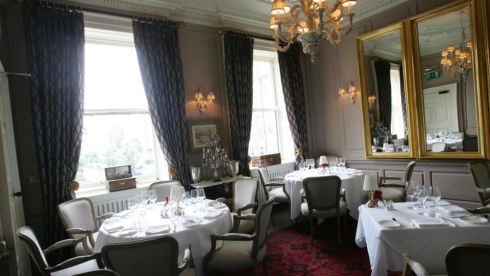 In January the idea of courgette flowers feels as distant as a sun-drenched photograph. But they will return and if we’re lucky they’ll be filled with prawns and scallops and set to sail on a frothy lovage soup like they are in Neville’s beautiful dish. Restaurant 41 at Residence, 41 St Stephen’s Green, Dublin 2, tel: 01-6620000.
Runner-up: The decor doesn’t get more plain and simple than James Sheridan’s Canteen at Blackrock Market. But for a few nights of the week he cooks up a stonker of a set menu. His lobster raviolo with samphire, peas and carrots (another hit of summer) really floated my boat last year. The Canteen, Blackrock Market, Blackrock, Co Dublin. 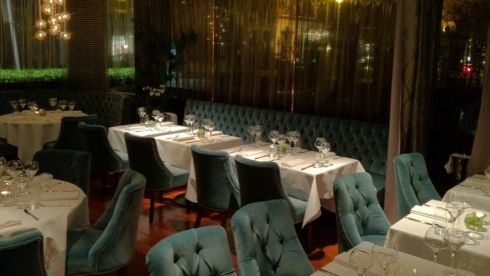 “Do you like blood?” Finnish chef Mikael Viljanen asked before serving up an astonishing plate of hare royale, a dish not for wimps. A round of slow-cooked hare meat coated with thick gravy of blood, booze and truffles, its colour and texture verging on hot, black and profoundly flavoured mud. Like nothing I’d ever tasted before. The Greenhouse, Dawson St, Dublin 2, tel: 01-6767015
Runner-up: Kevin Aherne’s hake in Sage Restaurant in Midleton. Gorgeous, fresh china-white hake fried in butter and served with great bearnaise and a crispy egg showed that Aherne is not only able to source great ingredients he can also do them real justice in the kitchen. Sage Restaurant, The Courtyard, 8 Main St, Midleton, Co Cork, tel: 021-463 9682.

In this chi-chi West London suburb Swedish chef Mikael Jonnson takes food deadly seriously. It’s what makes his chocolate dessert such fun. He combines temperatures, warm and frozen, textures, crisp and cloying and bitter and sweet in a bowl – I can go into a dreamy reverie remembering at will. Hedone, 301-303 Chiswick High Road, London, tel: 44 20 8747 0377
Runner-up: It reminded me of breakfast in my Cavan grandmother’s house with rhubarb and ginger jam on home-made bread but I think I would have loved The Courthouse rhubarb rice pudding with house-made ginger ice cream even without that little tug on the heartstrings. The Courthouse Restaurant, Carrickmacross, Co Monaghan, tel: 042-969 2848.

The French kitchen genius Alain Passard dancing from table to table to pose for selfies in Ox Restaurant Belfast in his shiny white patent shoes and floor-length apron. The visiting chef served up truffled egg yolk, lobster and black radish, a heavenly asparagus consomme with vegetable ravioli alongside Stephen Toman’s superb signature dish of squid noodles, romanesco and chorizo jam
Runner-up: In the gloaming of the evening at the end of the summer we sat at a long table in a garden in the Irish Museum of Modern Art for a candlelit supper cooked over a fire by chef Giles Clarke with Michelle Dermody of the Cake Café. By the end of the night I was riffing in a southern (as in Streetcar Named Desire rather than south Dublin) accent with lovely people I’d never met before. Fun on a stick.

At bog standard takeaway prices, Eddie Ong Chok Fong takes southeast Asian food out of the sugar and sour sledgehammer flavour world and brings many other layers to the experience. His hake wrapped in banana leaves with a 12-hour sauce made with lime leaves, chilli paste and wild ginger was wonderful. Aroi Artisan Street Food, 1 O’Connell St, Limerick, tel: 061 311411
Runner-up: Pho Ta. In the foothills of the Central Bank in Dublin’s Temple Bar this Vietnamese restaurant does great basin-deep bowls of steaming pho and banh tom pancakes and plenty of fresh vegetables and herbs to add to your dish at the table to experience a really fresh soup. Pho Ta, 6 Cope St, Temple Bar, Dublin 2, tel: 01-6718671. 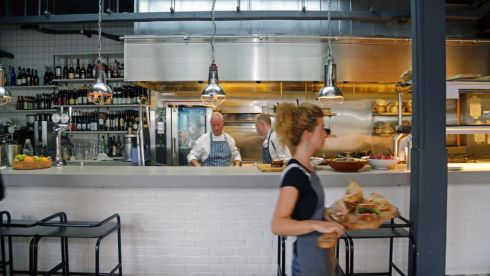 It might hide under a bridge but it’s far from being a troll. Pizza e Porchetta is worth the small schlep away from the docklands, a place where pizza lovers and people who prefer something slightly less casual can get along. Pizza e Porchetta, The Malting Tower, Grand Canal Quay, Dublin 2, tel: 01 6624199.
Runner-up: Elaine Murphy has had some teething problems with this being such a large and unwieldy hodgepodge of spaces but The Woollen Mills has given Dublin has some lovely new dishes like the curried crab claws and the pink eggs and tongue: ox tongue fritters and eggs pickled in beetroot with horseradish mayonnaise. The Woollen Mills, 42 Ormond Quay Lower, Dublin 1, tel: 01-8280835.

We nicked so many of the Super Miss Sue chips out of our kids’ portions that there was nearly a row. Friends have ordered bags with the intention of only having a taste, before polishing them off right down to the salty crispy shards at the end. They’re simply the best chips in the city. Super Miss Sue, Unit 2-3, Drury Street, Dublin, tel: 01-6799009. Runner-up: The Tuscan fries at Mourne Seafood Bar in Dublin’s docklands. They’re fried with the skin on and then dusted with diced black olives, parsley and parmesan. Mourne Seafood, Millennium Tower, Charlotte Quay, Grand Canal Dock, Dublin 4, tel: 01-6688862.

Best coffee
I doff my hat to Irish Times arts writer Gemma Tipton for her line that some of the trendier coffees must taste better through a beard. Maybe the facial hair filters out the bitter grittiness of it all. My best coffee of 2014 was a lovingly-brewed glass cup of V60 drip blend of a blend of four beans at the gorgeous new arrival on Dublin’s coffee scene. Two Fifty Square, Park Lane House, Williams Park, Rathmines, Dublin 6, tel:01-496 8336. 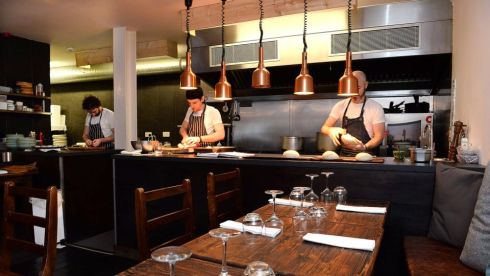 Best restaurant
Harry’s Restaurant on the Inishowen Peninsula in Donegal

It was a tussle between two excellent contenders but the title for 2014 goes to Harry’s Restaurant on the Inishowen Peninsula in Donegal for what they’re doing with food and where they’re doing it. The Wild Atlantic Way has a wildly good restaurant in this partnership between chef Derek Creagh and owner Donal Doherty. They serve just-landed fish from local boats alongside just-picked vegetables from one of their three gardens. Irish restaurant dining doesn’t get better than this and they’re selling it a prices that are jaw-droppingly low. Harry’s Restaurant, Brigend, Co Donegal, tel: 074-749368544.

I love what chefs John Wyer and Sandy Sabek have created in this magic small place where the welcome matches the food. Again the ingredients are king here and a thoughtful calm kitchen turns them into small plates of mouth-tickling pleasures. Forest Avenue, 8 Sussex Terrace, Sussex Rd, Dublin 4, tel: 01-6678337.