Words made flesh: Why author events are the new hot tickets 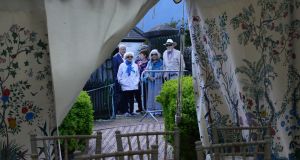 Last week tens of thousands attended open-air concerts at three locations across Dublin (Dún Laoghaire harbour, St Anne’s Park and the grounds of the Royal Hospital Kilmainham). With more open-air concerts in the coming weeks at the RDS, Croke Park, Nowlan Park and Trinity College Dublin from Bon Jovi, Fleetwood Mac, Westlife, Bob Dylan, New Order and others it remains to be seen how many heritage rock/pop acts one small country can sustain – or endure – in a single summer.

It’s all part of the much-discussed shift in the past few years in the music industry’s business model, away from releasing recorded music and towards live performance.

What has been less noted is a similar shift to live events in other areas, most notably the realm of words.

On the face of it, many of these spoken-word events just look like extensions of the traditional book trade

On Thursday, you could have seen historian Simon Schama in conversation at the National Concert Hall, while on Monday, the Olympia Theatre in Dublin will host a discussion between journalists Bob Woodward and Fintan O’Toole about (what else?) Trump’s White House. Woodward’s erstwhile investigative colleague, Carl Bernstein, is at the Festival of Writing & Ideas in Borris this weekend, where audiences can also hear Martin Amis, Julian Barnes, Anne Enright and Naomi Wolf. Then next Thursday, the Dalkey Book Festival kicks off, with thousands expected to show up for Stephen Fry, iPhone creator Jony Ive and hundreds more (including, in a very minor role, this writer). That follows hot on the heels of Listowel Writers’ Week and Dublin’s International Literary Festival, both of which finished in the last few days.

What’s going on? On the face of it, many of these spoken-word events just look like extensions of the traditional book trade, which these days works its authors to the bone at festivals, seminars, public interviews and signings. But Borris’s designation as a festival of writing and ideas rather than of books seems apt; at many of these events, the book is a launchpad rather than an endpoint. And there are more and more of them because there appears to be a growing number of people who want to hear discussion and debate in the flesh, in a public place and definitely not on a screen.

The unappetising word “meatspace” was first coined more than 20 years ago by digital utopians to describe the physical world which we would be forced to endure when not floating blissfully through cyberspace. Its echoes of the charnel house and the butchers’ block, implying an almost religious revulsion at our base material existence, was set in opposition to an imagined future in which human life would achieve transcendence through the liberating power of digital communication.

That Manichean duality, that struggle between good and evil, is still there in how we conceive of the relationship between the digital and the physical, but the coin has flipped.

Hell is now the internet, riddled with trolls, fascists and fraudsters, damaging our mental health, extinguishing our capacity for empathy and ushering in a new Dark Ages. I exaggerate slightly, perhaps, but the fact that so many of our personal and professional relationships are now conducted online means we are confronted with consideration of the inherent value of actual tangible stuff.

Once upon a time, the class divide of the information society was between an elite with unlimited access to the digital world and the have-nots who were excluded from it for social, economic or geographic reasons. But the new divide emerging will increasingly be between those who have no choice but to rely on digital services for health, education or even companionship and those who are wealthy or privileged enough to choose human interaction instead.

It’s hard not to see the increased popularity of all these events, alongside the rise in physical book sales and the modest resurgence of vinyl, as part of a new preference for the tangible over the virtual. The danger is that all this simply becomes a new way of monetising celebrity. After all, the most lucrative example of the phenomenon is the “self-empowerment” conference, where business executives (or their companies) pay large sums to hear motivational speeches and touch the robes of mid-range public figures. The optimist in me, however, sees the flowering across the country of these celebrations of words and ideas and can’t see it as anything but a good thing.

O’Rahilly house at risk after being damaged by vandalism
8