Review: The move to London made Friday’s Late Late Show even more parochial than usual 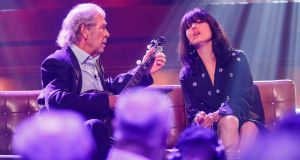 Ryan Tubridy promised viewers of the Late Late London Special “a different day in the office,” yet despite the ornate and echoey surrounds of Central Hall in Westminster, it was very much business as usual.

Instead of a parade of tedious plugs for book signings, RTÉ documentaries and comedy gigs, the night was about celebrating links with our closest geographical relatives.

Ever wondered what it meant to Imelda May to be Irish in London? Or Laura Whitmore? Or Arsenal player Katie McCabe? You may wonder no more.

The move to London appeared to make things on the Late Late Show even more parochial than usual.

The audience - made up mainly of ‘ex-pats’ - whooped in recognition every time Roscommon or Monaghan or Termonfeckin was mentioned.

This much-mooted London special had the feel of a glorified town hall shindig. It’s been some time, too since the LLS Bingo Card has had The Farmer’s Journal, Maxi Dick & Twink, the Ploughing, Dickie Rock, Mayo For Sam, Joe Dolan and Terry Wogan ticked off in the same episode.

Throughout, the vibe was decidedly “sure aren’t we great” - a heady brew of nostalgia, patriotism and chat about the ferry from Dun Laoghaire.

Graham Norton provided a soft opener, with misty-eyed chat about his early days in London as a restaurant worker. This will not be a night for in-depth, meaty interviews.

Still, there was enough time for him to drop a zinger: “My mum is watching - she’ll be turning over to see me though (on BBC 1)”.

Much criticism down the years has been levelled at the Late Late Show for essentially chucking a shepherd’s crook into the Montrose canteen to assemble a guest line-up.

It has always been a victim of geography, limited to either those who are present in Ireland on a given week, and the smaller number willing to travel.

Tonight’s line-up is populous, certainly, with no shortage of well-known names: among the guests are Imelda May, Barry McGuigan, Finbar Furey, Mick McCarthy, Paul Costelloe and Brendan O’Carroll.

Yet there’s a niggling sense of an opportunity lost: many of these guests certainly no strangers to the show, and could have been lured to Montrose with little persuasion.

Also in the mix are a number of Irish non-celebrities with their own stories to tell; a move that should have added decent texture to the evening, but punctures the vibe somewhat. Swords poet Stephen James Smith breaks through the cuddly backslapping and the various passages of torpor with a powerful spoken word performance.

All in all though, it’s a hectic flit from one guest to the other; proof positive that a show that unfurls at a choppy clip doesn’t necessarily make for high-energy television.

One guest who is a newcomer to the Late Late Show, and is something of a booking coup (or atrocity, depending on your outlook), is Nigel Farage.

It soon becomes clear that the two hours of talk about Irishness, identity, emigration and alienation has been merely a prelude to this moment; a panel on Brexit-slash-gammon-orgy involving the toady Ukip Leader, spin doctor Alistair Campbell, economist Liam Halligan and Baroness Dee Doocey.

Farage and Campbell sparring like two overheated spaniels on screen is nothing new; Farage putting his case forward in a room of 1200 Irish emigrants certainly is.

Farage plays the part of paternalistic Paddysplainer like he’s being paid by Fox or something. He doesn’t see the Irish as “migrants,” and despite a “complex shared history,” anyone who says as much is merely causing problems where they don’t exist (what he has been doing in the green room for the past two hours is beyond me).

Asked of Ukip’s role in fanning hatred in the UK: “Oh dear, is that a question? I suggest Madam, the prejudice is on your side”.

Campbell is robbed of the airtime he deserves - by rights, he should have been perched on the side of the stage the entire time, offering withering stares and mutterings - yet provides decent bang for buck with a succinct: “Own your shit, Nigel. You delivered it.”

Tubridy makes a rather fine fist of keeping the entire fandango on rails, offering: “You know what lads, it’s no wonder you’re in a mess”.

The debate has barely been advanced in the slightest, though one suspects that’s beside the point.

In any case, Farage seems to very much enjoy the Corrs/Dubliners/Clannad/Chieftains super-group thingy at the end, if his very enthusiastic clapping is anything to go by.

And really, sure where else would you get it?

Speak out against wrongdoing in an Irish workplace, and here is what happens
3

Idles singer Joe Talbot: ‘Conor McGregor is an inspiration. There’s a severe vulnerability to him’
9