Brendan Courtney needs to talk about Mam – and himself

Review: He was supposed to be discussing his ageing mother’s life, but ended up dealing with his 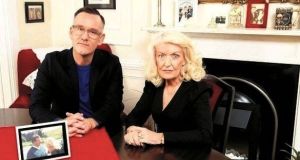 Brendan Courtney and his mother Nuala in We Need to Talk about Mam. Photograph: RTE

Early in Brendan Courtney’s new documentary We Need to Talk About Mam (RTÉ One, Monday, 9.35pm) – cross between a frank personal diary, a financial advice programme and a make-over show – the presenter catches himself in a Freudian slip.

It comes shortly after his family have gathered together to scatter his father’s ashes in Dublin Bay, whose family care was the subject of Courtney’s intimate documentary We Need to Talk About Dad early last year.

It’s a telling moment, because if Brendan needs to speak about Mam, he does so with his own deep concerns, private fears and characteristic approach. A vivacious woman in her seventies, Nuala Courtney is gregarious, sharp-witted, caring and strikingly glamorous. It’s hardly surprising that she and Brendan should have such a close relationship: in many respects they’re dead ringers. As with so many similar family members, that may account for the thrum of good-humoured tension between them.

Where they differ is in their regard for the future. Brendan, who has built a career from giving life advice, whether sartorial or financial, seizes plans the way an overboard sailor clings to driftwood. Nuala tends to go with the current.

Ushered briskly into the format of one of Brendan’s financial guidance shows, we learn that his mother has no pension or nest egg, and more poignantly, no real understanding of herself.

Her house is worth €400,000, though, Brendan estimates, which gives the show an excuse to explore some fantasy alternatives, decamping to the Alicante coast to explore sunshine, stucco, swimming pools and supermarkets. “I wasn’t trying to get rid of my mam, but I was trying to show her that she can still plan for a bright and happy future,” Brendan tells us.

(I took that to mean that Brendan is trying to get rid of his mam.)

If the show is fascinatingly uneven, it’s because for all his own careful planning, Brendan can’t predict where his efforts will lead. As with that Freudian slip, director Joanne McGrath is canny with her inclusions, featuring for every jaunty conversation that plays up to the cameras, a more affecting one that does not.

“The freedom,” Nuala remarks of her new single status, with something like awe. “I can do what I like now. That’s hard.”

At the age of 47, Brendan seems like the gadabout who has seen the sombre end of the party. He can’t do everything he likes – that’s hard. “I didn’t have children for a reason,” he says. “I don’t want to be a carer. She seems to think I’m the man for the job.”

Every bright solution, however, brings another tang of reality: the people they meet in a manicured retirement village who lost either their spouses or their pensions; financial advice from Eoin McGee so grim it even depresses Brendan; a hard-working carpenter saved from homelessness by one lucky break.

It is. And when a tearful Nuala points out an unfairness in this whole project, urged to contemplate sunny exile, or downsizing, before she is ready or willing, it stops Brendan in his tracks.

“I never thought the time would come when I’d have to move out of my own house,” she tells him. “And I don’t want to talk about it anymore.”

In the end, they consider one last idea: converting Nuala’s home into a granny flat with separate accommodations. It may be telling that all those prickly jokes about moving in together stop. Thinking back to our earlier introduction to an amazingly sprightly 105-year-old man in an American retirement complex, living next door to his 73-year-old daughter, it feels less like a quirky inclusion than a head-spinning premonition.