Texas floods: the freeway shark and other fake news 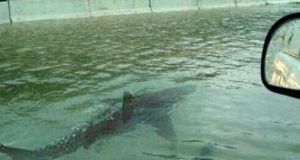 It is a shocking image. A great white shark swimming alongside a white jeep in the floodwater on a freeway in Houston, Texas, during Hurricane Harvey.

Of course, it’s not real.

The very same shark previously swam down an identical freeway during Hurricane Irene in Puerto Rico in 2011, through a shopping mall in Kuwait in 2012, and along the inundated streets of New Jersey in the wake of Hurricane Sandy.

Those images of planes submerged beneath the floodwaters at Houston airport? Also fake – they were based on a mock-up produced by a climate group to show what could happen at LaGuardia airport in New York if climate change were to continue.

That photo of Obama doling out food in the emergency shelter? Real – but it wasn’t taken during Hurricane Harvey. It dates back to Thanksgiving in 2015, when he volunteered at a homeless shelter.

Even the journalist Katie Couric was taken in by last week’s outpouring of fake and ever-more-fantastic photos of the Texas disaster, tweeting a photo she believed a friend had taken of an alligator on her driveway in Houston to her 1.8 million followers.

Natural disasters and terrorist attacks bring out the best and the worst of social media. Fake news competes for attention with real-time updates from emergency services, and offers of beds or somewhere for those affected to rest or charge their phone.

And all of it competes with people debunking photoshopped images, or yelling into the cyber vacuum about the dissemination of fake news.

Where do these images come from? And why do people feel compelled to share photoshopped images in the midst of an emergency?

The first question is certainly more straightforward. The shark image was originally captured by National Geographic photographer Thomas P. Peschak in South Africa in 2003. He took it using old-fashioned slide film, while balanced precariously on the tower of a research boat in the waters off South Africa.

The original image shows a great white swimming up behind a kayak, while the kayaker turns to look over his shoulder.

Believe it or not, this is a shark on the freeway in Houston, Texas. #HurricaneHarvy pic.twitter.com/ANkEiEQ3Y6

Look who wandered into my friend's Houston 'hood Thinking about everyone affected by Harvey and 🙏🏻 they r safe pic.twitter.com/BTuGLACiqg

Arrrgh really? My friend sent it to me...was I punked? #callinghernow https://t.co/ibTOuBHgxW

There was a shark in the water..🌊☔ #hurricanesandy #waaaaat pic.twitter.com/wAeLqP2t

Ironically, the first reaction of many who saw the photo in its undoctored form was to question whether it was real. “To date there are still hundreds of websites that debate its authenticity. Not only is the image real, it was one of the last images I took using slide film before transitioning to digital,” Peschak wrote on his blog.

His image was first used as part of a fake news story in 2006 by a French fishing magazine, Le Magazine des Voyages de Peche, which created an April Fool’s Day story around it. It emerged again several years later, in a fake story about a shark tank bursting open in a shopping mall in Kuwait, and then again during Hurricane Sandy, when it was one of several sharks “turning up” on city streets, and yet again during Hurricane Matthew.

And it went viral again earlier this week after a Scottish blogger based in Dublin, Jason Michael, tweeted it and, he later blogged, unintentionally “trolled the whole of America”.

“Someone, as someone always does during a hurricane or a heavy flood, had put the darn thing up on Twitter again. Here’s what I did: I downloaded the image, recomposed what I thought was a rubbish tweet, and pressed the blue ‘tweet’ button,” Michael blogged.

He did not intend to make a point. He shared it, so he told Buzzfeed, to have “a poke at reality” and for the amusement of his 1,300 followers in Scotland.

At the time of writing, the tweet had been retweeted 64,000 times and liked over 97,000, “a new personal best”, he wrote, adding that he would not delete it. “I might never be this famous again,” he said in his Buzzfeed interview.

Michael claimed his “accidental fake news experiment” had been instructive. The shark, he wrote on his blog, “didn’t happen. Yet it’s easy to grasp, it tickles the imagination, it allows us to be seen to be enraged or be one of the smarty pants who myth busted it… But what we are missing is that this is precisely how the media – the ‘real’ or ‘mainstream’ media – has operated for decades,” he concluded.

People who disseminate these images often claim that they are offering some kind of scathing and insightful commentary on the “mainstream media” and poking fun at “virtue-signalling social justice warriors” who complain about fake news.

To an extent, even when they fail to take anyone in, they succeed by contributing to the general mistrust of information – though that does not seem to have been Jason Michael’s intention.

The BBC tracked down a self-described fascist teenager who had started a tweet about a fake London Bridge victim. “That tweet was a public service … I made these ‘people’ [who retweeted the picture] feel good about themselves didn’t I? … If anything I should be lauded,” he said over Twitter.

Sometimes, sharing fake news is simply what it looks like -- a desperate, calculated, narcissistic cry for retweets and likes.

And sometimes, it has the most prosaic explanation of all: bored kids looking for attention, the equivalent of previous generations playing knock-a-dolly, only to a much wider audience than a single aggrieved neighbour.

And often the motivation is more innocent, if no less misguided. Someone comes across the image online and posts it to social media as a way of seeking out connection, or feeling like they’re somehow invested in whatever horror is unfolding.

Part of this is down to the nature of digital media, which gives us a false sense of ownership or proximity to breaking news events. We sit at our screens, hitting refresh and waiting for the next update, the next round of shocking images. When updates are slow in coming – when there’s an information vacuum, emotion rushes to fill it. On social media, facts invariably take second place to feelings.

In the aftermath of the Westminister attacks in London, a photo of a London Tube sign went viral. “All terrorists are politely reminded that THIS IS LONDON and whatever you do to us we will drink tea and jolly well carry on thank you.”

The fact that it was – inevitably – fake didn’t seem to matter to those who had shared it.

“At a time like this is it really helpful to point out that its fake? The sentiment is real and that’s what’s important,” one of those who had tweeted it, the TV doctor and presenter Ranj Singh, said to the Spectator.

Whatever the motivation, the pervasiveness of these images underlines just how tenuous our relationship with truth is. Increasingly, it doesn’t matter if it is true so long as it feels true; so long as there is an aura of what Stephen Colbert famously called “truthiness”.