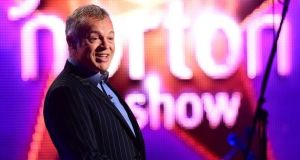 Sinn Féin president Mary Lou McDonald and Hollywood stars Gabriel Byrne and Caitriona Balfe Join Ryan Tubridy. McDonald will discuss taking over the leadership of the party while Gabriel Byrne will chat about a career that has taken him from Bracken to Bel Air. Architect Dermot Bannon will discuss the new series of Room to Improve. Feeder will provide .

Graham Norton (Friday, BBC One, 10.35pm)
Guests include Margot Robbie and Allison Janney, both Oscar-nominated for their roles in the drama based on a true story, I, Tonya, and Daniel Kaluuya, Oscar-nominated for Get Out and currently appearing in Marvel’s Black Panther. Also appearing is Oscar-winner Alicia Vikander, who stars as Lara Croft in the new Tomb Raider movie. Plus music from singer-songwriter Camila Cabello, who performs Havana.

The Ray D’Arcy Show (Saturday, RTÉ One, 9,45pm)
The Hothouse Flowers join Ray to mark the 30 year anniversary of their hit ‘Don’t Go’. Released in 1988, the album ‘People’ was one of the most successful debut album in Ireland. The band will join Ray in studio for a special performance and a look back through their song book.

Seven Seconds (Friday, Netflix)
A hard-hitting drama series which taps into the Black Lives Matter movement, and addresses the ongoing issue of the dysfunctional relationship between US law enforcement and the black community. The story revolves around a hit-and-run in which a black teenager is left for dead. The driver, a white cop, tries to cover up his crime, with help from his fellow officers, while the boy’s distraught parents try to get justice for their son from a jaded prosecutor.

Sharon Stone plays a successful children’s author, Olivia Lake, who lives in a super-affluent neighbourhood among the ski resorts and mineral mines of Utah, where the ultra-rich residents seem to set their own rules, and are ruthlessly protective of the moneyed status quo. When Olivia disappears in suspicious circumstances, all the nasty little secrets and lies soon come to the surface. Look out for other blasts from the past in the cast, including Paul Reubens and Beau Bridges.

Troy: Fall of a City (Saturday, BBC One, 9.10pm)
An eight-part drama created by David Farr, the man behind the most excellent The Night Manager. The classic tale of the siege of Troy is told from the perspective of a young herdsman, Paris, whose life (and the course of history) is changed by an encounter with the gods (they were quite numerous in those days). David Threlfall, Frances O’Connor and Louis Hunter are among the cast who work like Trojans to bring this semi-mythical tale to life.

Celebrity architect Dermot Bannon has had to deal with some tough customers, but he faces his biggest challenge yet when he dares to enter the home of Daniel and Majella O’Donnell. Majella wants to get the couple’s large detached home in Donegal done up; Daniel is happy enough with the way it is. Bannon will have to work hard to create a new living space while keeping both Daniel and Majella happy.