Week 6: Devilish portrayal of a traitor is all in the details 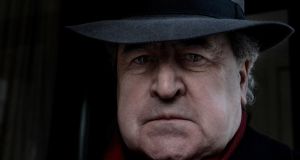 We know the story. Victor Maskell, pillar of the establishment, Keeper of the Queen’s Pictures, has been revealed as a traitor to his country, a spy for the Russians. As he waits for the Damoclean sword to fall he reflects on his life, in all its tiny details. And this is what makes The Untouchable an unforgettable masterpiece.

Banville’s writing shines from every sentence. His descriptions are beyond description. Sexual encounters of the queer variety – Banville disdains the “gay” euphemism – are lovingly detailed. For example, “The dead fish slap of Boy’s stout thighs against the red-haired young man’s buttocks” heard from behind a public lavatory door in London on the day Hitler died, and the erotic potential of the buttoned fly. “I used to love to see that delicate tweaking action of the hand . . . the thumb and index finger busy as mice while what the Americans delightfully call the pinkie held itself aloof . . . like an agitated matron reaching tremulously for her tea cup.”

And behind all this the unanswered question: Why did Victor, son of a Church of Ireland bishop, husband of a Jewish Vivienne whose aunt, uncle and three children were to die in Treblinka, hold so firmly to his belief in Marxism that he would risk everything and everyone to serve it? Betrayals heap upon betrayal: Victor’s betrayal of his wife and children, his betrayal of his king, queen and country. As his co-conspirators Boy and MacLeish make the break, boarding a ferry for France, thence on to Russia, Victor watches them standing at the rail, “looking down at me like a pair of Politburo members viewing the May Day parade”.

And what’s left for him apart from disgrace? “In the head or through the heart? Now there is a dilemma.”