How good was Alanis Morissette in Dublin? You Oughta Know

Review: The summer sun stretched out across Iveagh Gardens – just like 23 years ago 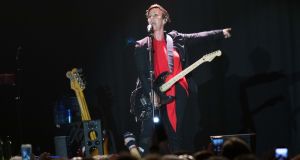 Iveagh Gardens was the second of two Alanis Morissette gigs in Ireland. Here she is performing in Cork on Wednesday night. Photograph: Darragh Kane

‘I think I know 10,000 people going to this gig,” I texted a friend on Thursday evening. “But do they have a knife?” she replies.

Alanis Morissette’s lyrics for Ironic live on 23 years after the tune made everyone grow their hair long, part it in the middle, and gear us all up for definitions of “irony” in State exam English essays.

But this is more than a meme. Tonight, the teenagers who once babysat, humming the hooks from Jagged Little Pill, rifling through neighbour’s fridges for at the bare minimum a Superquinn chocolate mousse, or lazily aiming the remote control until Eurotrash turned up on Channel 4, are now themselves WhatsApping their own babysitters. Isn’t it ironic? Well, no, so it would still qualify for the song, dontcha think?

This was 30-something Christmas. The women raised their fists, and like the restaurant critic in Ratatouille taking a bite of a nostalgic meal, their past flooded back to them, where the line about going down on someone in a theatre was an electric shock of sexual frankness that only existed in Judy Blume books and episodes of Friends, where slammed bedroom doors echoed, now reverberating as beat across Iveagh Gardens in Dublin.

And we remember. Clove cigarettes and bad decisions. Ropey boyfriends and Rachel haircuts. One woman in the crowd reminisced about seeing Alanis in the Point and splitting the cost of the concert brochure with her then best friend, and divided the reading of it three weeks at a time.

We heard the harmonica first, as All I Really Want kicked in, and there she was. In leather trousers, a cropped haircut and a sheer black and white shirt, backed by a black-clad band, Alanis was ready, but clearly stunned by the reaction from the crowd. Now she knows what she means to us.

“Alanis was the genesis of the Me Too movement,” someone in the crowd says. “We actually asked to sing this song at a school Mass,” someone else offers, “they said no.”

Then You Learn kicked in. You sure do. Alanis got sexual politics in a way that meant you didn’t have to dress up like Madonna to display your feminism. You could be that girl, with dodgy purple lipstick and blue mascara, with a canvas bag, scuffed Docs, and a propensity to carve your name on a church pew, and feel what she was saying far before you had the vocabulary to articulate it, far before defiance was par for the course.

In Dublin, the sun was stretching out across the summer like it used to do in memory. Where knobbled knees were crossed in fishnets at bus stops on the way to clubs when it was still bright out. July in the 1990s. Back then it felt like summer never ended. 2018’s heatwave is almost a follow through: Leaving Cert weather.

Then Ironic came. Alanis need not have even sung it such was the passion from the crowd. But she did, and changed a lyric too: “like meeting the man of your dreams and then meeting his beautiful ... husband.” The “wife” lyric replaced, representing an Irish crowd now totally comfortable in what elsewhere might be risqué. The extended cheer was pronounced.

Like the Penalli Pen ads that interrupted those MTV videos back in the day: but wait, there’s more.

You Oughta Know was the highlight. Inside most punters, teenage angst burst forth towards the sunset, as if Alanis cracked a can of fizzing teenage ennui.

What children learn from PewDiePie, Stampy and DanTDM
8