Plus songs you have to hear from White Denim and Spiritualized 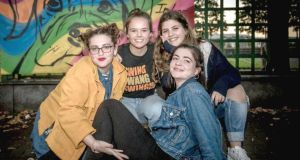 Pow Pig: they have enough of a sense of humour to call themselves a 14-piece boy band from Sligo in their bio

What Lo-fi alt-rock band with charm
Where Limerick
Why If you’ve long since stopped going to gigs in little clubs or basements you might be surprised to hear Ireland still has a vibrant, if small, guitar-band scene. In among better-known names like Whenyoung, Pillow Queens, Thumper, Fontaines DC, Otherkin and Silverbacks lies the Limerick group Pow Pig, who have enough of a sense of humour to call themselves a 14-piece boy band from Sligo in their bio.

Anna Marie Rooney, Andrea Mocanu, Laura Drennan and Leah O’Donnell have released two EPs, Denture Adventure and Buzz Buzz, in the past year, and their recordings have a charming lo-fi buzz that makes it sound as if they’re still finding their feet in an actual garage. In a world of polished production and airbrushed media calls, it’s refreshing to hear a rough-around-the-edges band as they develop.

They write lyrics about going to the dentist, a blind milkman, the pleasure of gardening and the cult movie The Room, all delivered with an enthusiasm that is as endearing as it is youthful.

Their eight songs already show signs of expansion, such as in the piano-and-brass slow number Rosalee and the shimmering beach jam of Concerned, which culminates in the chorus line of “Skibbidy-boop-bop-bop-bop-badada / F*** all of y’all.” Okay, maybe not that mature, but bands shouldn’t grow up too fast.

White Denim: It Might Get Dark
White Denim make their boogie-rock sound effortless – dare we say groovy – to a degree that few can match. The Texas band hark back to the fun of rock’n’roll, with none of the messiness.

Spiritualized: I’m Your Man
Jason Pierce has hinted that And Nothing Hurt, which is due on September 7th, will be the final Spiritualized album. A far cry from the big-band-style set-up the band made their name with, it has basically been made on Pierce’s laptop. Even the financial constraints of much of the modern music industry can’t stop Spiritualized from sounding anything other than grandiose, but I’m Your Man, the album’s first single, has a palpable intimacy.