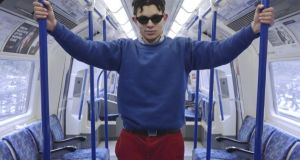 Jimothy Lacoste: his appeal is his deadpan vocal delivery that is at once amateurish and endearing

What Strangely inspirational humorous rapper
Where UK
Why The long month of January can be a good time to immerse yourself in new music after December’s period of intense end of year recaps. The artist needs to be a contrast to the dreariness of the season and who better than an artist who says “I take the music seriously, I just don’t take myself seriously”.

Enter Timmy Gonzalez who goes by the ridiculous name of Jimothy Lacoste to brighten up your life. Born in 1999, the London rapper has a sense of fun in his music-making verging on the comedic.

Yet the targets of Jimothy’s music so far have been pleasingly sensible. There are songs about wearing nice clothes (“tucked in shirt, nice jeans, cords / clothes is there, you might as well take advantage of it”), an anti-drug song (“Baby take it easy stop getting high / Yes I know things get boring / But here’s an idea I’ll grab a pen and start drawing”), London travel woes (“businessman, you’re standing too close to the yellow line”), a song about how busy his life is (it wasn’t when he wrote it but it is now) and impressing a woman by speaking Spanish.

Jimothy - I CAN SPEAK SPANISH

You won’t find much delinquent behaviour here except for Getting Carjacked, a GTA-inspired daydream fantasy about stealing a car, which has its tongue firmly in its cheek.

The appeal of Jimothy is his deadpan vocal delivery that is at once amateurish and endearing. His arrangements are more advanced – like the flute flourishes on I Can Speak Spanish, the hook-filled verses on Fashion and the suave Casio keyboard-style of Future Bae. So if you need a pick-me-up, then enjoy yourself vicariously through the meme-ready man whose catchphrase is “life is getting quite exciting”.

Chaka Khan: Hello Happiness
After last year’s surprise return for the soul singer with the excellent Like Sugar single, Chaka is back at it again for a whole record with former Major Lazer producer Switch. The title track from her 12th studio album is a disco-funk that aims to drag the listener up to her uplifting level.

David Keenan: Evidence of Living
The Dundalk singer-songwriter has blossomed into a classicist storytelling troubadour who harks back to Ireland’s literary greats like Beckett, Behan and Yeats. Evidence Of Living is proof of Keenan’s influences, a seven-minute piano-driven song in which the voice and lyrics are centre stage, singing of a man with “a face like an aul painter’s radio”, and “kids whose dreams died in fifth class”.

Marian Finucane: Her work in South Africa ‘where no one else dared to go’
8

Netflix fails to make sense of the Miami Showband Massacre
10

The Playboy of the Western World review: A freshly unsettling journey
Real news has value SUBSCRIBE