Iron Maiden’s Nicko McBrain: Book of Souls is Number of the Beast for the new millennium

The Iron Maiden drummer talks about going back on the road, Bruce Dickenson’s cancer diagnosis and answers rumours that the band are planning to call it a day 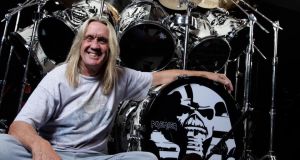 Iron Maiden have been around for nearly 40 years and yet this is the longest album of your career to date. How did Book of Souls come about?
We talked about doing an album three years ago when we were all at the bar drinking. We were all looking at each other and we were saying to each other, “will we do another record. The Final Frontier (previous album) was a cracker”. We knew we were going to do another album. It has taken five years since the last one, or has it? The years seem to get shorter as you get older. It’s in our DNA. Our fans still support Iron Maiden. I suppose, you know, we could go fart in a paper bag and most people would go, “cor, that’s a bit alright. It’s not bad, is it?” (He laughs), but we don’t. We go and make these great albums and this is the best one yet.

Steve (Harris, the bass player) formed the band back in December 1975. Professionally, the first album (Iron Maiden) was 1979. That’s still an amazing time for making music the way we do. This is our 16th studio album. I look it and I go, ‘wow, this is the culmination of everything’. This is early Maiden, this is progressive Maiden. The end of Eternity Should Fail has all this weird stuff on it. It takes me back to the 1970s to bands that were psychedelic.

Do you really believe this is the best Iron Maiden album ever? Is it better than Number of the Beast for instance?
I think this is the new millennium Number of the Beast. That was one of our best albums and the follow up to that (Piece of Mind) was probably the best of the lot of them. Brave New World (2000 album) was phenomenal, I loved A Matter of Life and Death (2006), but, having said that, this album is the culmination. It has something for everybody. Take Speed of Light, for instance. It is the old Maiden. That intro is a testimony to Deep Purple and the title track, Book of Souls, is fucking immense – if you’ll excuse my French – but I think this is the best album we’ve ever made.


And it’s been very well received by music critics and by the fans...
It’s a fantastic piece of work. There’s not one bad song on it. I spoke to Steve (Harris), the other week and I asked what we might do live and I said to him, “why don’t we do the freaking lot”. He laughed. Can you imagine Iron Maiden playing The Book of Souls? It would end with Empire of the Clouds and then it would be ‘thank you’ and ‘good night’. There is no Iron Maiden, no Run to the Hills and none of the classics.

I’m so proud of all the guys. Kevin Shirley (producer) has done an immense job on the best sounding album we ever had. I’m extremely excited. I can’t get wait to get out on the road.

What motivates you to continue given all the success you have had in the past?
We love to do what we do together. We’re musicians. We like to create new music, we look to go out and tour our older stuff. It’s what we love to do it and it’s a way to give back to the fans while having a great time ourselves. We still love to tour. We still love to do records. The only way that will ever change is when we can’t do it.

The last song on the album is the 18-minute-long Empire of the Clouds about the crash of the R101 airship in France in 1930. How did it come about
Cor blimey, don’t start me off on that one. Bruce has got two songs on this, the opening track and this one, which he wrote on his own. When he presented that to me, I heard the story on the train going back and forth between London to Paris (where they recorded the album) when we went home at the weekend. He showed me this song on the piano. He’s not the greatest piano player. To quote him, it’s like two fingers on a typewriter on a piano.

I really embraced this whole story of the airship and we set about to make the music work to describe what is going on musically in the airship. We really went to town on it. He gave me so much scope on it. That’s an epic song. That will go down very well with our fans.

How much did Bruce Dickinson’s cancer diagnosis impact on the album?
Bruce was not diagnosed until the middle of December, by which time we had pretty much finished the album. What you are hearing is this man with a tumour in the back of his throat, on the back of his tongue and in his thyroid gland. He didn’t know it until he had a doctor come in to see him in Paris. Then they diagnosed him after he did the album. I’ve got to be honest with you, I think it is the best vocal performance I’ve ever heard from the man. It’s just unbelievable.

I take it you are going to tour the album with Bruce Dickinson as pilot. Is it going to be another Flight 666?
I don’t think so. We’ve done that one, but I’m sure he will be trussed up in the nose of a 747 again. He’s a short bloke. Can you imagine him flying that big old plane? There is no big back story behind the 747 because we haven’t got it converted. All we have to do is paint it and put Eddie (the mascot) on the back of the tail. It’s still Ed Force One. It won’t be Ed Force Two.

After all these decades together, how do you get on with the rest of the band?
They all hate me because I’m the best looking bloke in the band. (He laughs). I told them I was going to play a small drum kit on this tour. They said, ‘nah, all the girls will be looking at you’. That’s an old story.

We get on better than ever. I did not think that would be possible five years ago. It’s like a love affair and the sex is the music. It’s a family of guys. I’d die for them. It’s that strong. I speak to Dave (Murray, the guitar player) every four or five weeks. I speak to Steve a couple of times over a couple of months. We keep in touch email-wise. We can have a year away from each other and it is like yesterday when we get back in the studio. That’s the true strength of a great friendship, a bond and a brotherhood. You can be away from someone and when you get back together, it feels like only a couple of hours have gone by and that’s very important.

Is Steve Harris still the driving force behind Iron Maiden?
Without a doubt. Steve Harris had a dream of Iron Maiden. There are five other guys living that dream with him. In my book, I’m the driver musically in terms of the beats. Musically, he is the passion and the drive behind Iron Maiden, and we have all embraced that from Steve. He is my boss. If Steve asked me to do something, I’d do it. He’s a big fellow and he’d crack you over the noggin with his fingers.

Bruce Dickinson has often said that Iron Maiden has not got the credit you deserve from the mainstream British music press. How do you feel about it?
It is a reflection of what happens to be the truth. We never sought after mainstream press. It is not what we are about. We don’t chase paparazzi. We don’t want to be in the news every day. What Bruce means about that is that we have done it on our own. If there is no respect from the press, who gives a shit? We love it when we get good reviews, we love it when we get bad reviews, because we know people are talking about us and that, at the end of the day, is what it is all about.

Many thought 2010’s The Final Frontier would be your last album. And now the rumours have begun that The Book of Souls will be your last album...
I can honestly say that we never, ever considered that this would be the last, that this will be the last world tour and then we will hang it up. We always keep our options open. We know we still love to make albums. I’d like to do the best tour and then do another record.

The Book of Souls is out on Warner Music now. Read our review here