Galway’s Beethoven celebration: ‘It has to be terrifying for everyone’ 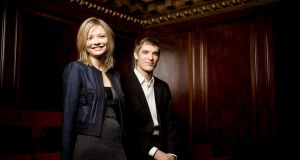 Russian violinist Alina Ibragimova and French pianist Cédric Tiberghien first played together in 2005 when they were both members of BBC Radio 3’s New Generation Artists scheme. They were brought together as part of a trio with another performer from the scheme, Swiss cellist Christian Poltéra.

I met up with the duo in Berlin’s Pierre Boulez Saal, the concert hall that is part of the Barenboim-Said Akademie, located a stroll from the Irish Embassy which is in a building with historic associations to composer Felix Mendelssohn.

I asked each when they had first heard the other play, and what they made of the experience. “It was when I actually played with him,” laughs Ibragimova. “We were thinking of it today. It was in London, playing the Ravel trio with Christian Poltéra in the City of London Music Festival.”

Tiberghien interrupts with an uproarious laugh. He’s been looking at my phone on which I’m trying out a speech transcription app. “You’ve got to see this,” he says. “Poltéra has become bull terrier!”

When they were brought together by the BBC, Tiberghien was delighted to be playing the Ravel, “a masterpiece of French music. Playing with a Swiss-German cellist, a Russian violinist, I had no idea if it would work, musically and aesthetically. There was just an instant understanding, strong enough to make us feel we should play more together”. They present their first encounter as a meeting in which intuitive responses meant that talk or discussion were almost not necessary. “A great feeling,” says Tiberghien.

They recorded a recital of Beethoven, Franck and Ravel for the BBC, and before they knew it they were working on a series of the complete Beethoven violin and piano recitals at London’s Wigmore Hall, performances that were later released on CD.

“Before the Wigmore,” Ibragimova says, “we went to Aldeburgh [music festival] and played all 10 sonatas over a weekend. And seven of them were new to us.” For Tiberghien it was “exciting, a time of real discovery, and it made us grow up very quickly”.

At that time, says Ibragimova, “if you were a [BBC] New Generation artist you weren’t allowed to repeat anything, because everything went out live. I went through all my repertoire in six months – and it’s a two-year scheme. I remember close to sight-reading the Beethoven Violin Concerto live on radio. That kind of thing.”

I mention reading that the great Russian pianist Sviatoslav Richter at one point set out to have a work new to him in every recital he gave. Tiberghien responds, “I had a teacher who was a friend of Richter’s, who told me, if you want to play in piano competitions, that’s absolutely fine. The only rule you have to respect is a complete new programme for each new competition, including new concertos every time. After 10 competitions, you can imagine the amount of repertoire.”

And also at the BBC, says Ibragimova, “I learned not to be scared of microphones. You just get used to it”. This starts a discussion about the perfection of the recording studio, where wrong notes and any number of other flaws can be corrected, and how this contrasts with the less foreseeable outcomes of concert performances.

“When we play live,” says Tiberghien, “I think it’s so important just to leave a little bit of room for the unknown, the unpredictable, the unexpected. That’s maybe the big difference between 15 years ago and now. There are so many things that we don’t plan at all. We just think, we’ll see on stage what happens, and we know each other well enough to make it work. That’s such a nice feeling.”

What, I wonder, are the particular challenges of the violin and piano repertoire? “Just to make people forget about the pre-conception, the prejudice that the pianist is accompanying the violinist, that basically we’re playing a piece for violin with some music behind it.” He points out that Mozart described what we call his violin sonatas as sonatas for piano and violin, “and we sometimes have to insist that it’s printed the right way in the programme, because we definitely play it the right way”.

“That, and I would say also,” adds Ibragimova, “preconceptions about the music that we’re planning.” They played Cage and Crumb in Berlin, though their programmes in Galway are pure Beethoven, part of the celebration of the 250th anniversary of the composer’s birth. “Here,” she says, “that repertoire is welcome. They asked for it. But so much of the time we have to defend it. Just because of prejudices. Once they hear it, they enjoy it.”

What makes Beethoven so special to them?

“The variety,” Ibragimoiva suggests, “and the internal struggle. I always feel it’s so deep. What he talks about, what he expresses sometimes is desperate, but the most beautiful moments are so real and so intimate.”

“It really goes beyond music,” says Tiberghien. “It speaks about the human being and probably the dream of a perfect human being. It’s faith in humanity. You can feel it everywhere. When you listen to the opening of the Violin Concerto it’s a statement, like opening a big gate into a vista of what a human is capable of. There is so much hope in his music.”

“You see that,” says Ibragimova, “and then you see the late string quartets, where there are so may bits of emotion and thought and soul that get almost trampled over. The complexity of humanity, of what it is to be human. It’s just a huge spectrum.”

Galway’s Beethoven celebration focuses exclusively on works of the composer’s 20s and early 30s. Tiberghien’s solo offerings include two sets of variations. “I was always very interested in this form,” he says. “I remember my teacher in the Paris Conservatoire saying it was a little bit like an experimental lab. Basically, it’s the form in which he spends the most time trying things out, not always successfully. He wrote variations from a very early age, his very first piano piece was a set of variations, and at the other end you have the variation movements in the Ninth Symphony and the Diabelli Variations. For him it was a tool to develop material, sometimes a cell of just two or three notes.

“I really, really like his variations, so I wanted to play a little set – the one based on the Menuet à la Viganò from Haibel’s ballet Le nozze disturbate – that’s maybe early and more classical. But then also the Variations in F, Op. 34, where he explores a new way to write variations. He write in a new key for every variation, which is very striking, and the Eroica Variations, where he demonstrates his incredible skill. He wrote a set on the same theme in the Eroica Symphony, and all the variations for piano are completely different. It’s as if he could write again and again and again and again. It’s how he shows his skill as an inventor.”     The selection of violin sonatas includes the Sonata in E flat, Op. 12 No. 3, “a big one,” says Ibragimova, “with possibly my favourite slow movement of them all. Compared to Nos 1 to 3 and No 4 this is the big event.” “More Beethovenian,” suggests Tiberghien, “this one really is a statement.”

The violin and piano programme also includes a set of variations which Beethoven wrote on the aria Se vuol ballare from Mozart’s Le nozze di Figaro. They are “a kind of discovery” for Ibragimova. “I didn’t really know them, and we played them for the first time last month. They’re very sweet. And the Kreutzer Sonata is – she hesitates – a monster, really. Musical terrorism, with a lot of other qualities.”

“The sheer size of it,” Tiberghien chips in, “the power. Even with today’s pianos we have the feeling the sound is not big enough. Can you imagine this on the much smaller pianos of the time? It must have been terrifying. I would have loved to see people’s faces after hearing this 42-minute long piece after the first performance.”

The difficulty is part of the point, says Ibragimova. “Exactly,” agrees Tiberghien. “We have to find a way to make this feeling very clear for the audience. It has to be terrifying for everyone, for us and for the listeners. Sometimes at the end of the first movement we can hear people just laughing.” “Out of nervousness,” says Ibragimova.

“There are just so few movements where you can really breathe in the first movement,” says Tiberghien. “It’s literally a rest-less energy.”

Alina Ibragimova and Cédric Tiberghien join the ConTempo Quartet and others for the Midwinter Festival: Beethoven presented by Music for Galway and Galway 2020 at the Town Hall Theatre from Friday, January 17th to Sunday, January 19th, musicforgalway.ie

‘The beaches are open and people are having a wonderful time’: Why Jaws is still so scary
9