Sligo event a magnet for ‘larger Irish family’ and those with no Irish links, says President 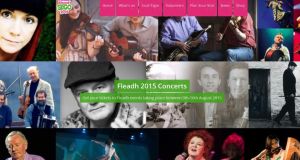 Sligo was full of people dragging wheelie suitcases and musical instruments through its streets on Sunday as Fleadh Cheoil na hÉireann , “the biggest traditional Irish music festival on the planet”, was launched by President Michael D Higgins.

Just a few hundred enthusiasts attended the first Fleadh Cheoil in Mullingar in 1951 when, according to President Higgins, “Ireland’s traditional culture was at a low ebb”.

On Sunday, when he launched the eight-day 2015 Fleadh at the “Wild Atlantic Way gig rig” in the centre of Sligo, the President pointed out that over 350,000 people are expected to attend this year.

Senator Labhrás Ó Murchú was predicting closer to 400,000, and as someone who has attended “probably about 50” fleadhanna he is something of an expert.

Praising the “heroic” work of Comhaltas Ceoltoirí Éireann in reviving Irish music, the President pointed out that the Fleadh was a magnet for the “larger Irish family” and also for people with no links to Ireland.

Mr Higgins welcomed visitors with “ neither ancestral nor geographic links to Ireland but who, with a curiosity that we all welcome, have developed a kinship with the Irish through culture and our folk traditions”.

A lot has changed since 1951. Fleadh hoodies and T-shirts are the attire of choice for many young musicians in Sligo. The official Fleadh cheoil website is encouraging them to “play music, make new friends and take music selfies (tweeted using #sligofleadh2015)”.

The elite of the traditional music world will arrive in the coming days and will be warmly welcomed, judging from the number of signs outside pubs declaring “musicians welcome”. “Sterling welcome” was another popular notice.

If people thought WB Yeats was going to even briefly step out of the limelight for the week of the Fleadh, they reckoned without the Drumcliffe-based Cos Cos dance group.

They presented a pageant entitled “Under Bare BenBulben’s Head” billed as “an artistic interpretation of an imaginary meeting between two of Sligo’s best known historical figures, WB Yeats and St Colmcille”.

It was an apt pairing. Not only has the 6th century missionary close links with Drumcliffe, but the history books show that after being buried on the island of Iona off Scotland, his remains were disinterred many years later and moved to Downpatrick where he was laid alongside St Patrick and St Brigid.

With the serious business of Scoil Eige now getting into gear for thousands of young competitors, Irish Rail has laid on extra services between Sligo and Carrick-on-Shannon for those staying in outlying towns and villages .

The company is also mindful of those hoping to enjoy “a good evening out without the stresses of driving home afterwards”.

Another popular transport initiative is the John Lennon Educational Tour Bus, which Music Generation Sligo and the Fleadh Cheoil have organised .

Supported by Yoko Ono Lennon, the bus boasts a fully equipped music studio and on Wednesday a lucky group of young musicians will be aboard for a masterclass in how to record and produce original music and make a video.

For others there will be busking opportunities on every corner.