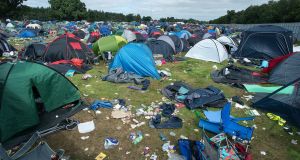 Ten kilograms of waste per visitor – equivalent to a full aircraft hand-luggage travel case – is expected to to be collected from the Electric Picnic site in the coming days, according to Friends of the Earth.

Under an agreement between Festival Republic, organisers of Electric Picnic, and the Cosby family, owners of the Stradbally estate, the concert venue is to be returned as close as possible to pre-Picnic condition over the next few days.

Local scouts will help out with the removal of abandoned tents, the best of which will be handed over to agencies working with the homeless.

However, Friends of the Earth, which was present at Electric Picnic 2018 for the fourth year in a row, cautioned that many of the tents would unusable. The charity said  a belief that the tents would be used for the homeless may be encouraging revellers to abandon them.

Friends of the Earth, which had 160 “Green Messengers” on hand to divert waste into recycling and composting facilities, said “in fact there are too many tents in too poor a condition for charities to be able to pack and use them”.

Clearance of the site was slow on Monday afternoon, as security staff at the venue gently suggested to the last of the 55,000-strong audience that they may “have homes to go to”. A determined few found the Stradbally Co Laois site a hard place to leave, as they hung around outside tents, extending the weekend experience.

They did so amid rubbish including empty beer cans, food wrappers, chairs, inflatable mattresses, discarded clothing – including shoes and coats – and of course tents in large numbers.

In addition to charity workers, a small number of enterprising festival goers were spotted scouring the site for usable tents and other material to take home

In 2011, the Association of Independent Festivals reported that on average one in six people left their tents behind at UK festivals. This year at the Reading Festival in the UK, 60,000 tents from 100,000 festival attendees were left behind, up from 13,000 abandoned tents the previous year.

Friends of the Earth said this was attributed to a mistaken belief that tents would be donated to charity.

Cara Augustenborg of Friends of the Earth said just over a quarter of waste in the Electric Picnic arena was recycled last year, thanks to initiatives such as the cup deposit and return stalls and their work with Every Can Counts.

However she said only 1 percent of the waste generated in the campsites was recycled.

Much of this waste consisted of personal belongings people left behind, particularly tents, which were “collected by bulldozers and sent to landfills and incinerators”.

Ms Augustenborg added: “Waste is a huge problem at music festivals because people bring inexpensive camping gear and leave it behind, often mistakenly believing it will go to charity.”

A member of the public relations team for Electric Picnic agreed that a “minuscule” number of tents are used for charity. She said the perception the tents were redistributed began about four years ago when some tents were shipped to a makeshift village for refugees in Calais, France.

In 2017, only a “very small number” were recycled, and these were for use by a local charity. The spokeswoman said 950 sleeping bags had been reused last year, but that this number was also small compared with the overall number of sleeping bags. Even to take down tents individually was a mammoth task, she said, and for this reason they were taken away with the aid of machines and sent to incineration.