A fan captured the moment U2 cancelled a concert in Berlin on Saturday after frontman Bono lost his voice a few songs into the show. Video: Twitter.com/@EFTM 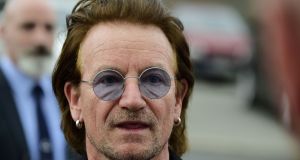 U2 have apologised to fans for cancelling a concert in Germany after lead singer Bono lost his voice. Photograph:Tobias Schwarz/AFP/Getty Images.

U2 lead singer Bono has assured fans that he will be back to full voice for the remainder of the band’s European tour.

U2 had to cancel a concert in Berlin after five songs on Saturday after Bono lost his voice.

However on Sunday night the band said the tour would continue as planned and the Berlin concern would be re-scheduled for November.

The Berlin concert was the second show of the band’s European leg of their eXPERIENCE + iNNOCENCE tour,

However a short time into the performance Bono said something had happened and he did not think he could go on.

The power of #bono voice before it surprised him in #Berlin and left him abruptly...he was singing his guts out (per usual). @u2 @U2eiTour The crowd so felt for him as he with surrender was obviously powerless and vulnerable. He’s real and he’s human, too, like we all are. pic.twitter.com/f0Tl3hhuA2

The band is scheduled to play in Cologne in Germany on Tuesday.

In a statement on the official U2 website on Sunday Bono said:

“I’ve seen a great doctor and with his care I’ll be back to full voice for the rest of the tour. So happy and relieved that anything serious has been ruled out. My relief is tempered by the knowledge that the Berlin audience were so inconvenienced. There was an amazing atmosphere in the house, it was going to be one of those unforgettable nights but not for this reason… We can’t wait to get back there on November 13th”.

American actress Ashley Judd was at the Berlin concert, and shared a clip of Bono singing before his voice cut out.

“The power of #bono voice before it surprised him in #Berlin and left him abruptly... he was singing his guts out (per usual).”

Judd added that “the crowd so felt for him” and that he was “obviously powerless and vulnerable”.

The European leg of the tour culminates in Ireland in late October and November with two shows in Belfast and four in Dublin, all of which have sold out.