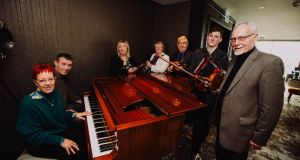 Returning to Belfast for the second year in a row, this year’s Gradam Ceoil gala concert celebrates the great and the good of traditional music. Flute player Catherine McEvoy will receive the accolade of traditional musician of the year, while Tríona Ní Dhomhnaill will receive the laurel for collaboration, and the ever-modest and low-key Nicky and Ann McAuliffe will be garlanded with a joint lifetime achievement award for their five-decade-long commitment to music teaching and tune excavations. Thomas McCarthy is traditional singer of the year. Other guest performers include Paddy Glackin and Dónal Lunny, Maighread Ní Dhomhnaill and many more.

The 15th annual Scoil Cheoil an Earraigh, directed by Kerry musician Brendan Begley, includes workshops, masterclasses, sessions and concerts, with musicians from the US, Canada, Scotland and Ireland, including Liz Carroll, Tim Edey, Margaret Stewart, The Friel Sisters, Nell Ní Chróinín, Ingrid Henderson, Allan MacDonald and many more. This is a boutique festival like no other. Every cafe, bar and snug will resonate to the sound of pipes, accordion, fiddle and harp, with Irish-language classes available for those who really want to get under the skin of Corca Dhuibhne.

Connemara sean-nós singer, harpist and broadcaster Denvir joins Armagh multi-instrumentalist, composer, singer and artist Kerr, whose songs and compositions have been recorded by the likes of Karan Casey, Flood, Brian Finnegan and Kate Rusby, among others. Music and songs of the heart will be the theme for the evening.

Connemara trio on flute, accordion and bouzouki (with a guest bodhrán player for this evening’s session), Cogar’s music is influenced by former teacher Mary Bergin and two Galwegian legends, accordionist and composer Máirtín O’Connor and sean-nós singer Joe Éinniú. The band are currently working on their second album.

Conal Ó Gráda, Máire Ní Chéilleachair, Niall Vallely, Bobby Gardiner and Nada Ní Chuirrín join other musicians from UCC’s music department for an evening of music, song and dance in the heart of the Cúil Aodha Gaeltacht, where such renowned musicians as Seán Ó Riada and Iarla Ó Lionáird carved their musical identities.