Arts Council budget still 10% lower than it was in 2007, according to The Arts Matter report 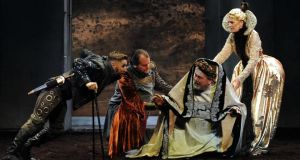 Arts funding should be restored to boom-era levels to compensate for the sector’s lack of resources, a new Oireachtas report suggests.

The Arts Matter, published on Wednesday by the Joint Committee on Culture, Heritage and the Gaeltacht, recommends that Taoiseach Leo Varadkar fulfil a promise he made in November 2017 to double funding for culture, arts and sport over the next seven years.

Dorgan told its members that Irish society seemed content to “allow most artists to be ruthlessly condemned to lives of poverty and choose to ignore that artists are not just a necessary economy but indispensable to civilisation and that monies spent are an investment which yields great returns”.

Hynes told the committee it was unacceptable that funding for the arts, “whom we so clearly and obviously rely on to protect our national reputation, is the lowest per-capita income of the European Union”.

The committee also met officials from the department, the Arts Council, the National Council for Curriculum and Assessment, and Music Generation. O’Snodaigh said he and his fellow members believe the arts remain “marginalised and very often shoved away from the mainstream when it comes to funding”.

“Witnesses spoke of the detrimental effect of cuts to the arts budget. We are recommending that all Government departments incorporate arts-and-culture considerations into their respective policy considerations, recognising the positive impact this approach can have on State policy overall, including on tourism, the economy, education and community development,” he said.

The 105-page report will be forwarded to the Department of Culture, Heritage and the Gaeltacht for consideration and for further debate in the Dáil and Seanad.