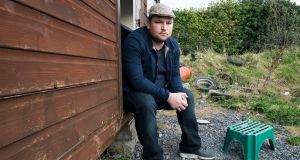 Actor and film-maker John Connors: “I used to love watching The Sopranos because I’d sometimes feel like Tony Soprano, with the big belly to rest things on.” Photograph: Dave Meehan

A while back I saw 100 More Like These with Stephen Jones at the Viking Theatre in Clontarf, which blew me away. He adapted the play about the San Patricio Irish soldiers who left and abandoned the American army in their war against Mexico, and defected to the other side. I hugely enjoyed it, but usually I’d rather be in a cinema seat anytime. With my background, watching theatre wasn’t the thing to do.

I’m watching Mad Men at the moment. I’m on the third season and really enjoying it. Jon Hamm holds the show well; he’s like an old Clark Gable-type of actor, the look of him. The series isn’t like Breaking Bad where you can easily define what it’s about – it’s just about an era, the way they spoke, the way they behaved, sexism: it was male-dominated world, though many would argue it still is.

The Joe Rogan Experience. I get all my fight news from it, then he’ll get a guest on that could be anybody: a film star, a rock star, nutritionist, a palaeontologist. They won’t just be talking about their expertise. He lets them be human and discuss other subjects, and that leads to interesting conversation.

I bring my iPad everywhere. If I’m away overnight for work, I bring it to my hotel and watch Netflix, so it doesn’t break up my routine of watching my boxsets. And I can just rest it down my fat belly. I used to love watching The Sopranos because I’d sometimes feel like Tony Soprano, with the big belly to rest things on. It also means I can put the earphones in, because I like to listen to things loud.

That’s Damien Dempsey’s Live at the Olympia – he’s a friend of mine but I was a fan before. I listen to this album a lot, it’s helped me through some hard times. Damo is someone whose live shows are even better than his albums, and live albums mean that you get a “best-of” set. I think he’s a hugely important artist, he’s a cultural icon.

I’d been resisting Instagram because Twitter and Facebook alone takes up hours – you keep checking it as if something important is going to happen, I don’t know why. @god_creative is a hip-hop artist on Instagram and he’s a very funny dude. He has an obscure sense of humour that I get. I spend all day laughing thinking about his posts.

New York is the only place I don’t feel homesick, and I also love London, where I was born and have lots of family. But I have to go with Dublin, especially this time of the year. There’s nothing like going out about four of five o’clock, meeting friends walking along the street, sitting down in a little snug, and getting a freezing cold pint of Guinness – it’s what dreams are made of.

I love Maser’s ideas and images because it gets people thinking. The councils are taking street art down but that’s f*****g bollocks. It’s an uppity attitude. Street art is a great way of the youth expressing themselves – I’d rather them do that than hanging around a corner taking ketamine and robbing a pizza driver. I’m not really into other types of art. When someone does a splash circle and it’s supposed to be worth €10 million because you’re supposed to break it down and find the depth in it, I’m like ‘f**k off, I don’t know what the f**k you’re on about’.