Tenement living: ‘There was six in one bed and seven in the other’

No 14 Henrietta Street is now officially the Tenement Museum Dublin, which brings the city's tenements of the past vividly back to life. 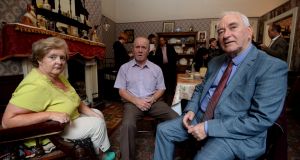 “That’s where we all lived,” says Peter Brannigan, looking at the space under the recently reinstated staircase in the hall of No 14, Henrietta Street in Dublin 1.

The staircase had been removed from the Georgian mansion in the second half of the 19th century, when the building was converted for use as a “lodging house”, creating the single room where the 13 members of the Brannigan family lived in the early 1940s. “There was six in one bed and seven in the other,” he recalls.

Number 14 is now officially the Tenement Museum Dublin, which opens to the public in October. You can get a sneak preview of the newly renovated building by booking tickets for Hentown, an immersive site-specific play from ANU Productions set in the house and on the street outside in the aftermath of the collapse in 1963 of two tenements in Dublin’s city centre – tragedies which are often seen as marking the final chapter of Dublin’s notorious, squalid inner-city slums.

Dating from 1748, No 14 was one of the last great Georgian townhouses built by Luke Gardiner on the street he had first laid out 20 years previously. Over the following century it would be occupied successively by landed gentry, bishops and members of the legal profession. But the area became less and less socially fashionable during the 19th century and, in 1877, No 14 was converted to a tenement consisting of 17 one-, three- and four-roomed flats. The 1911 census showed more than 100 people living in the building.

The last tenants left the house in the 1970s, and in succeeding decades it fell into such disrepair that some believed it was beyond saving. Now it has been structurally repaired and fully restored under the direction of Dublin City Council heritage officer Charles Duggan, project curator Dr Ellen Rowley and conservation architecture firm Shaffrey Associates.

The museum is one of seven flagship cultural investment projects which the last government funded as part of the 1916 commemorations. It was the subject of a political spat last year when then minister for state for heritage Aodhán Ó Ríordáin attacked the council’s plan to call it a Townhouse Museum rather than a Tenement Museum, insisting that it should tell the story of tenement life alone and that “any attempt to deviate from that story will not be entertained”.

While the completed museum does indeed have the word tenement in its title, Duggan insists the original vision of covering the entire story of the building remains unchanged since the project’s inception.

In the basement, an early 20th-century, one-roomed tenement interior has been recreated, based on photographs from Darkest Dublin, John Cooke’s collection of photographs of slum life in the city.

Even on an August day, it’s a dark, cramped and cold space. On a rickety table stand a few pieces of “tenement china” – jamjars used as cups. This room would have been damp and vermin-infested, with the house’s crumbling back wall making it impossible to keep warm. “The top floor and the basement were the worst places to live,” says Duggan.

Brannigan was born in this basement before his family moved to the brighter flat upstairs. What was it like to live in such cramped conditions?

“Well, we weren’t here most of the time,” he says. “From first thing in the morning we’d be out there and that’s where we’ll be all day.”

He points out the window to Henrietta Street. It was a tough time, he says. Although his father was employed, the family frequently had to rely on the local nuns for food.

Not all tenement life was quite so grim. A recreation of a one-bedroom flat from the 1950s shows that some were relatively spacious. With its galley kitchen, large living room and decent-sized bedroom, it’s larger than the minimum floor space currently permitted for a one-bedroom flat in Dublin, and would probably command a hefty rent on the open market. What might bring down the price is the absence of a bathroom – two lavatories to the rear of the house served the needs of everyone who lived in No 14. On the back stairs leading to them, the rough disinfectant paint which was ubiquitous in tenements is still visible.