Fitzwilliam Street museum must not be used to ‘respectabilise’ ESB development 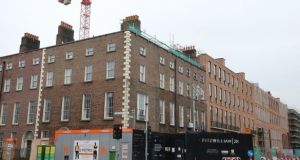 The ESB’s proposal to convert the former Georgian House Museum on the corner of Merrion Square in Dublin into luxury apartments has been opposed by The Irish Georgian Society. Photograph: Nick Bradshaw

The Georgian House Museum on Dublin’s Fitzwilliam Street should not be reopened, former director of the National Museum of Ireland Pat Wallace has said.

The ESB’s plans to convert the museum at 29 Fitzwilliam Street into luxury apartments are being opposed by the Irish Georgian Society, Dublin Civic Trust, An Taisce and Dublin city councillors. More than 2,000 people have also signed an online petition calling for the museum to be reopened.

However, Mr Wallace said the museum and its collections should not be used to “respectabilise” the ESB’s redevelopment of Fitzwilliam Street.

The museum opened in 1991 to celebrate Dublin’s status as European Cultural Capital, was operated by the ESB and the National Museum of Ireland as an exhibition of “Dublin home life from 1790 to 1820”.

The building was restored by the ESB in 1988 as part of a deal with Dublin Corporation, agreed a decade earlier, to allow the company to exceed standard plot ratios in its expansion of its 1960s-built office headquarters on the street.

In the mid-1960s 16 Georgian houses on Fitzwilliam Street had been demolished to make way for the company’s new headquarters, designed by Sam Stephenson and Arthur Gibney.

The museum was temporarily closed in 2017 to facilitate the demolition of the Stephenson/Gibney building and the construction of a new ESB headquarters, and the exhibits were taken into the care of the national museum.

However, as the new building nears completion, the ESB has said it does not intend to reopen the museum and instead has applied to Dublin City Council to convert the building into three apartments, which it intends to sell individually.

A return of the exhibits to Fitzwilliam Street would be “ill advised”, Mr Wallace said, “given that the new block represents a second and more serious affront to the Georgian city by a company, which despite its idealistic origins in the Shannon Scheme of 1927 and its subsequent achievement of rural electrification, has turned into a developer in what should be a protected area of the capital”.

He said: “The national collections cannot be used to bolster, respectabilise or promote speculation or, by association, used to offset criticism.”

Mr Wallace was director of the National Museum at the time the Georgian House museum was established, but he said, this was prior to the acquisition and conversion of Collins Barracks into a museum.

“The barracks is now the State location for housing and displaying the art and industrial collections (from which the material at No 29 had been drawn). Commendably, the present museum staff have had this material returned.”

Mr Wallace has long championed a “Museum of Dublin” where the national museum and the city council would co-operate to show items from the 1200 years of Dublin’s history, “and suitably trained staff from the museum would use the collections to bring to life the story of Dublin in an authentic way”. However, this “remains unrealised”, he said.

The ESB has said the apartments “will deliver the highest levels of residential accommodation to best modern standards”. The company said it had “no future plans for a museum”, and it was “never envisaged that exhibition would run forever”.