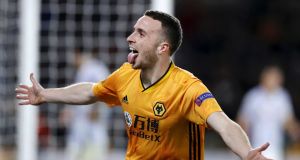 The Portugal international beat Liverpool fullback Trent Alexander-Arnold with a golden goal in the final of the Fifa 2020 competition after the match ended 1-1 in regular time.

In an exciting encounter both players spurned excellent chances late on in their 1-1 draw. They played a replay under golden goal rules to decide the winner with Jota striking late in the second half to come out on top.

Jota brushed aside Burnley’s Dwight McNeil 4-1 in his semi-final earlier on Saturday while Alexander-Arnold came from 2-0 down to knock out Manchester City’s Raheem Sterling after a golden goal.

Jota is a renowned Fifa player, representing Portugal in the eNations cup against professional gamers.

All 20 Premier League clubs were represented in the five-day tournament, either by one of their players or a celebrity fan. Singer-songwriter Tom Grennan flew the flag for Manchester United only to be thumped 5-1 by Alexander-Arnold in the last 16.

The winner’s prize fund will be donated to the PlayersTogether initiative, created by Premier League players to generate funds for the health service during the coronavirus pandemic. – Reuters

Review: EA has tightened screws in some areas after Fifa 19 – but that isn’t saying much

PES 2020: Mastery on the pitch, but frustrating off it

Review: Some issues will leave PES veterans with tinge of disappointment