There will be Vlad: an audience with young Dracula in Antrim 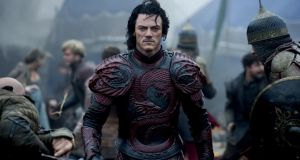 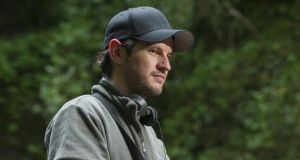 So, you think you’re British, bus-mates? Have a gawp at this.

It is September 2013 (movies take a long time to finish) and we are trundling from the Culloden Hotel – a dislocated limb of Balmoral Castle with a heavenly view of Belfast Lough – to a less gorgeous eastern corner of the city. A good handful of the journalists on our charabanc are English, but nothing in Northampton or Nuneaton has prepared them for the endless flurry of Union flags.

Coming from a less aggressively patriotic part of the UK (that’s to say anywhere else in the UK), my colleagues seem relieved to reach the vast Carpathian castle that has been constructed in a nearby industrial estate. We are on the set of a film that – formerly Dracula: Year Zero, later just Dracula – will soon journey out under the title Dracula Untold.

Universal horror is currently in a peculiar place. It was recently confirmed that that studio, which defined the cinematic genre with inter-war versions of Dracula, Frankenstein and The Mummy, is to bring those creatures back as part of a loosely linked franchise. Dracula Whatever it’s Called occupies an uncertain place in that project. Dealing with myths and rumours concerning Vlad the Impaler, a 15th-century Romanian lunatic, the picture is what we have come to know as an origin story. Matt Sazama and Burk Sharpless, the writers of the piece, are disarmingly frank about the debts owed to Francis Ford Coppola’s Dracula.

“Our original pitch was pretty straightforward,” says Sazama. “Remember the beginning of the Coppola movie? What if the entire movie was like that? As we got into it, the studio wondered if they could get a PG13 version. ‘Does he have to impale anybody?’ Look, people know just one thing about him.”

They go on to list Batman Begins as another influence. Mention of the dark knight reminds me of the script’s earlier title. I assume that Dracula: Year Zero was a reference to the comic Batman: Year Zero.

“No, no, no,” says Sharpless. “We called it that because we loved the movie Germany, Year Zero.”

The neorealist picture directed by Roberto Rossellini? That Germany, Year Zero? “Yes, we reckoned that people would guess the connection because our film is so similar.”

A glance at the set confirms suspicions that the studio may be trying to ride more voguish enthusiasms. Irish wolfhounds the size of Land Rovers meander about a full-size medieval dining hall teaming with beautifully dressed extras. It is hard not to think of Game of Thrones. Largely shot around Northern Ireland, the adaptation of George RR Martin’s A Song of Ice and Fire has enlivened the local film industry and made the place a haven for sword and sorcery.

Alissa Phillips, one of the film’s producers, could have taken Dracula Untold (as it then wasn’t called), to any sufficiently windy country. Phillips, Oscar-nominated as a producer on Moneyball, seems prepared for the Westeros question.

“I suppose Game of Thrones broke it in for us,” she muses. “They’ve been here for a while. We need crew. We need talent. We need infrastructure. Look, the reason Game of Thrones came here in the first place was because of the UK’s financial incentives, plus a separate incentive from Northern Ireland. You’re getting two incentives that help you put money on screen.”

Phillips quickly dismisses the oft-suggested notion that such productions come here in search of picturesque ruins.

“It’s a great place to shoot. It’s small. The food is good. It’s relatively easy to navigate. Those are the same reasons that Game of Thrones came here. We also looked at Romania. But we didn’t come here for castles. I get that a lot. Have you noticed the size of our castle? Something that size needs to be built.”

The picture is directed by Dubliner Gary Shore, and stars Luke Evans, Welsh star of The Hobbit and The Fast and the Furious franchise, as the man who will eventually become Dracula. The talented Canadian Sarah Gadon plays his wife. Also along for the ride are Dominic Cooper, Charles Dance and (or so it seems at first) Samantha Barks, who played Éponine in Les Misérables.

A glance at the set designs – mounted in a production office near Shaftesbury Square in central Belfast – confirms that the film is closer to fantasy than gothic horror. Useful bits of the Antrim coastline have been blended with computer-generated battlements to create a universe that owes as much to Middle-earth as to Transylvania.

Luke Evans, a man with a voice that booms like Burton, is dressed for ancient combat rather than Victorian blood-letting. There’s a great deal of leather down below and no small amount of hair up above. If the sword-wielding doesn’t work out for him, this proto-Dracula could always get a job in a Whitesnake revival.

“I’ve been distracted by noise all day,” he says, turning in the direction of faint chatter. “Shut up. Shut up.” A senior Universal official is dispatched to silence the offending talkers and Evans allows himself to continue.

“It’s a story that hasn’t been told before,” he says. “We are so used to the older gent with the white face. This is the man who became the legend. You are dealing with a human for a start. He has human emotions. He comes from an emotional base. He is triggered by his love for his people. The threat of the Ottoman empire then threatens his country.”

He mentions those earlier versions of Dracula. Although this is a very different film to the variations on Bram Stoker’s novel, Evans still finds himself following in the wake of some distinguished cloak-tails. There’s Bela Lugosi. There’s Christopher Lee. There’s Gary Oldman.

“Oh did you have to mention those names?” he bellows. “He is, of course, one of Universal’s oldest monsters. They released Dracula in 1931. He has been played by some of the greatest actors alive. There’s a sense of pressure. I feel that with every job. There is a responsibility to try something new.”

Good luck with that. A project on this scale offers risks as well as opportunities. Young Samantha Barks knows that. Having broken through in Les Miserables, the Manx singer, who finished third in the I’d Do Anything talent show, now finds herself forced to leap into the dark.

In Dracula Untold, Barks, hitherto a musical theatre specialist, was cast as the appalling mythical witch Baba Yaga. It’s not such a long haul from the Isle of Man to Belfast. We northerners used to holiday there in the years before Florida became affordable.

“We have all been going to pubs. Belfast pubs are so much fun,” she says. “What I love, being a big fan of music, is that it’s so celebrated here. I have never really come across anything like it. I feel very much at home here.”

Risks and opportunities. A year has passed. Dracula Untold, trimmed to an economical 90 minutes, is making its way into cinemas, but Barks’s role has been totally excised. The cruelty you see on screen is nothing to the savagery that happens in the editing suite. Well, at least she seemed to have a nice time making the thing. Frightening stuff.

Dracula Untold is on general release from Oct 3

Careless whispers: how the German public used and abused the Gestapo
Real news has value SUBSCRIBE