Tara Lee: a raw talent cooking up a music and acting career

She’s been in ‘Raw’, ‘The Fall’, ‘A Date for Mad Mary’ and stars in newfilm ‘Moon Dogs’, but the 22-year-old singer-songwriter from Donard didn’t always see herself as an actor 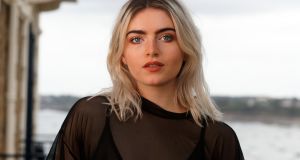 Tara Lee: “When I was four years old, I remember being really bored, so my dad said: ‘Why don’t you write a song?’ So I wrote a song about a man in space and thought I was David Bowie.” Photograph: Sylvain Lefevre/Getty Images

Tara Lee was born in the 1990s and can cite cultural cornerstones to prove it. Favourite movie? True Romance. First song she knew the words to? Heart-Shaped Box by Nirvana. Most audible influence on her music? Massive Attack.

The dating from these artefacts is useful. In other respects – with acting credits that stretch back to 2004 and a worldwide publishing deal with BMG Chrysalis – it can be tricky to remember that the Donard-born star is only 22.

And yet conversely, weirdly, that new deal has been a long time coming.

“My dad is a film composer,” she says. “And my mum is a badass who raised me with lots of good music and movies. When I was four years old, I remember being really bored, so my dad said: ‘Why don’t you write a song?’ So I wrote a song about a man in space and thought I was David Bowie. I kept sitting at my piano and working away in secret for years after that. At 15, I played a song for my dad. I told him it was Taylor Swift at first. And he brought me into the studio a few months later and we recorded about 20 songs. And that’s how I got my deal.”

Having moved to London last year, she still misses her dad’s roast potatoes “like crazy”, but she’s finally starting to think of that “vibey city”, as she calls it, as home.

“I spent a year after signing the deal travelling,” she says. “But I always knew that I wanted to write the music in a European city. I just think European producers look forward. They’re not trying to write something that sounds like something that someone else has written or to write a hit: they just want to write what sounds good.”

Between fashioning new songs that have been variously compared with Lana Del Rey and FKA Twigs, Lee has charted an accidental acting career.

To date, she has appeared in the Hendrix biopic Jimi: All Is by My Side, in Disney’s The Odd Life of Timothy Green (a starry vehicle featuring Jennifer Garner, Joel Edgerton and Lin-Manuel Miranda), and in the video for Sinead O’Connor’s 8 Good Reasons, playing the younger Sinead.

I never liked acting and I thought I was terrible at it. But that shoot was so intense. I discovered sides to me that I didn’t know were there before

Yet at home she is more likely to be recognised for her work on the RTÉ series Raw or as Daisy Drake, the best friend of serial killer Paul Spector’s (Jamie Dornan) teenage acolyte Katie Benedetto (Aisling Franciosi) in BBC’s The Fall.

Tara reports very different chats with both sets of fans.

“I was dating Dermot [Murphy] from Raw and when the two of us were together, we got noticed all the time,” she recalls. “People would wave and come up and say how’s it going? But when people recognised me from The Fall, the girls especially would get really freaked out.”

Acting was not a priority while she trained in music and dance at the National Performing Arts School. And Lee had already amassed quite a few screen credits before she ever thought of it as a job description. Last year’s award-winning A Date for Mad Mary would make all the difference.

“I never, ever thought of myself as an actor until I worked with Darren [Thornton] on A Date for Mad Mary,” she says. “At school, I never liked acting and I thought I was terrible at it. But that shoot was so intense. I discovered sides to me that I didn’t know were there before. Darren is a master. He’s so good at getting things out of people. I went in not really knowing what I was doing. I left with actual technique.”

Those skills have been further honed by her experiences on Moon Dogs. The Celtic co-production chronicles a road trip undertaken by two warring stepbrothers, Michael (Jack Parry Jones) and Thor (Christy O’Donnell). Michael has failed his A-levels and hopes to reunite with the girlfriend who seems to have forgotten all about him since starting university. Thor, a budding electro musician (whose stylings are composed by Anton Newcombe of The Brian Jonestown Massacre), wants to meet the mother who walked out on him when he was a baby. Along the way, they are joined by Caitlin (Lee), a free spirit who seduces both siblings.

“Shooting Moon Dogs was insane,” laughs Lee. “I expected every other shoot to be like that. But its just not possible. There will never be another Moon Dogs. When you watch the movie, that’s how it was. We were all driving around country roads in jeeps and cars, and getting seasick on the ferry and piling into single beds. It was full force. The director Philip [John] is a total anarchist. I thinks he cast people who could do the road trip for real. And everything that you’re seeing onscreen is almost a toned-down version of events.”

She collaborated with Anton Newcombe on the music for Moon Dogs but is keen to work on a film wherein music isn’t a major factor. So next up is Songbird, a film about a rock musician starring Cobie Smulders and Noel Clarke, and Schemers, a film about the music business in 1979. What gives?

“I’m trying to get away from it. Really. But those films were just too good.”

Moon Dogs has already won at least one notable fan.

“I went to one of the screenings and the director leaned over and said, ‘Kim Cattrall is sitting in the back row,’” says Lee. “So I tweeted about it and she messaged me back with advice.”

What did she say?

“Don’t forget to live. If you live a life, you’ll continue to grow as a person, and that’ll grow your work. It’s been good advice so far.”