With four leading roles this year alone, Rosamund Pike has come a long way since her casting aged 21 alongside Pierce Brosnan's Bond 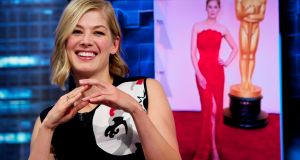 Rosamund Pike: “Gone Girl was a big shift . . . I got to play this sweet, vulnerable, flirtatious, cold, hot monster-lover” 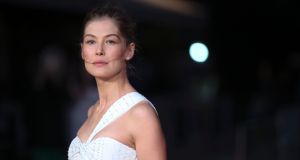 Rosamund Pike: “I was making dinner at the time and suddenly I was in floods of tears. I can’t explain it. I just felt a kind of visceral connection.”

Dressed in red and looking rather fabulous, Rosamund Pike bounds into hotel lobby where I’m sitting. “We’re doing an interview now, aren’t we?” Ms Pike will see me now. Apparently.

The glorious dress, she suggests, is a minor miracle. She has lately – meaning just two days previously – returned to London from the Santa Fe set of Hostiles, a western that sees a widow (Pike) and an army captain (Christian Bale) escort a dying Cheyenne war chief back to his ancestral lands.

“I’ve spent three months in work boots and a hat,” she says. “I come home. I know I have to do press. I open my cupboard and, well, I’ve got no idea. What do I dress like again? It’s always an odd feeling, because when you’re on a job, there’s such certainty about how you act and how you dress. And then you come home and you have to adjust to the comparative uncertainty of real life. Bit like being a soldier.”

She waves apologetically: “Not that I want to compare the two.”

Hostiles, she notes in her disarmingly softly spoken chitty-chattiness, is rather typical of her career of late.

“You don’t realise how much you want to study history until it’s too late for you to be learning it in school. My last few films have all allowed me to learn. I’ve just done one about life under the Nazis and another in the American west. To have been exposed to Native American history and culture – I just grew as a person.”

She shrinks a little, as she often does when she sounds a bit too much like, well, an actor. “Some of the most important things that happen in an actors’ life sound silly when you say them,” she says later. “But they’re profound when they happen. Really.”

Political yet intimate
A United Kingdom – a new, finely crafted historical romance from Belle director Amma Assante – ticks all those boxes. A political yet intimate drama based on the post-war mixed-race marriage between Seretse Khama, prince of Bechuanaland (later to become first president of Botswana), and London office worker Ruth Williams, the film sees David Oyelowo and Rosamund Pike playing a couple at the centre of a great deal of ill will.

Terrified that interracial royals might make for an affront to apartheid South Africa, brusque representatives of the British Empire work awfully hard to separate the couple.

“If it wasn’t so appalling, it could be an absurdist comedy,” says Pike. “A bedroom farce with people scrabbling around trying to keep this couple from going to bed. And even more absurd: the people in question are mighty forces of government.”

For a time, said mighty forces are successful. Shamefully, Khama spends years in exile in London with a young firebrand politician called Tony Benn (Jack Lowden) fighting his corner, while Ruth remains behind in Africa with their young daughter. The forced separation happens at the behest of more senior figures in Her Majesty’s government, notably Prime Minister Clement Atlee, and various African counterparts.

“I hadn’t read the script and I didn’t know the story,” says Pike. “But I saw a photo of Seretse and Ruth and it moved me. I was making dinner at the time and suddenly I was in floods of tears. I can’t explain it. I just felt a kind of visceral connection.”

She looks up a little nervously. “I said I wasn’t going to say that to the press. But now the cat’s out of the bag. And then my heart leapt reading their story. I’m a romantic. I believe in love.”

Enchanted by the idea that Ruth Williams Khama, a London office girl turned First Lady, travelled to Botswana knowing only what she had seen in an atlas, Pike, similarly, allowed Botswana to take her by surprise.

“I wanted everything to be new. And it really was a shock. It’s such a different landscape. So flat. So dry. And it’s so breathtakingly hot, it’s almost funny. You eat a tangerine, the juice is hot. You feel your contact lenses simmering on your eyeballs. And that’s how hot it’s going to stay.”

An international career
We’re not surprised that Pike has carved out such an international career. The only daughter of opera singers Caroline and Julian, Rosamund Mary Ellen Pike spent so much of her childhood on tour that she was fluent in German and French long before she took A levels.

“It wasn’t glamorous,” she says. “We just got to drive around in a gypsy fashion. It was like a circus life. I saw some of Europe. And we got as far as Russia and Japan. But it wasn’t international first-class travel. It was driving around. I’d never been to America, for example, until I got cast in the James Bond film (Die Another Day) when I was 21.”

Pike was a gifted cellist and pianist but she had no interest in following in her singing parents’ footsteps: “I never sang. I never had the urge. The character and the transformation that was the bit about it that I liked.”

In her teens, she won a scholarship to Badminton School in Bristol and joined the National Youth Theatre, where she got her first big break playing Juliet in a production of Romeo and Juliet. She read English literature at Wadham College, Oxford, making her the first Oxbridge-educated Bond babe.

Another big break. But there have been a whole series of them: her critic-confounding, naked turn in Terry Johnson’s Hitchcock Blonde, the nice-but-dim Helen in An Education, Hollywood good-woman roles beside action heroes Tom Cruise (Jack Reacher) and Bruce Willis (Surrogates), and, most recently, a very bad good wife in David Fincher’s Gone Girl.

“Gone Girl was a big shift in terms of the roles I was subsequently offered,” she says. “I got to play this sweet, vulnerable flirtatious, cold, hot monster-lover. I think those extremes are the reason why I got the Massive Attack video. Some of the fan letters are interesting. Typically they say: ‘When you were cast as Amy in Gone Girl, we were so worried. But we were wrong: you’re a crazy loon.’”

She laughs: “That has always been in there. It has just taken a while for the world to find out.”

Having wrapped more than four films this year, the 37-year-old is looking forward to some downtime in London with her mathematician partner, Robie Uniackie, and their two children.

“I’m taking time off next year for when my son starts school,” she says. “I want to be there, I want to do the school runs. Getting the Tube and walking are two of the best things about being a Londoner. I could never live in LA, I don’t think. They don’t have either.”