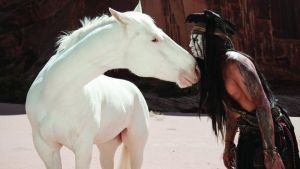 Such has been the reception in the US for this deeply unhinged entertainment that you half-expect the screen to vomit green bile on your head as you settle into your seat. The mark of the plague has been painted on the doors of all cinemas showing the picture. Sombre bells are rung in the street.

Sure enough, there isn’t much happy news on the outside of the package. There have been occasional revivals of The Lone Ranger over the past few decades – a disastrous film in 1981, a TV pilot in 2003 – but the squeaky-clean western hero has not been properly popular for close to half a century. Why, you may as well try and reinvent John Carter of Mars. (Do you see what I did there?)

Remember, also, that the film comes from the team that gave you the supernaturally tedious – though bafflingly successful – Pirates of the Caribbean series: Gore Verbinski directs; Jerry Bruckheimer produces; Johnny Depp plays Tonto. Vomiting screens may end up being the least of our worries.

Well, it’s no sort of masterpiece. But The Lone Ranger is a good deal less dreadful than advance word has suggested. Yes, Depp is absolutely awful. The camp, wobbly-voiced act that he flogged to death in Pirates has been augmented with a few borderline-
racist flourishes to create a comedy Comanche that somehow manages to simultaneously patronise and insult that mistreated nation.

The film is certainly at least 20 minutes longer than it needs to be. But Armie Hammer is very good as the hero – foolishly upright, but still likable – the action sequences are robust, and the attempts to engage with the genre’s history cause the mind to whir just a little.

The Lone Ranger from 2veinte on Vimeo.

We begin (and end, obviously) with an unnecessary framing sequence that finds an ancient Tonto, made-up in apparent tribute to Dustin Hoffman in Little Big Man, living out his last years as part of a travelling show. Quartered in San Francisco, Tonto tells a young boy the story of how he, a disgraced native American with a dead bird on his head, once helped a Texas Ranger avenge his murdered brother and thwart the schemes of evil railroad barons.

Hammer plays the Lone Ranger as an Ivy League patrician unexpectedly cast among swine. William Fichtner plays the chief hood as if cut-and-pasted from the videogame Red Dead Redemption.

In the course of the story, a party of bandits scare birds as they approach a farmhouse, three men in dusters wait menacingly for a train, and a red-headed woman (it’s Helena Bonham Carter) stands up against the malign manifestations of advancing modernity. Does that sound familiar? The Lone Ranger turns out to be practically a comic remake of Sergio Leone’s Once Upon a Time in the West.

There’s a pattern forming here. Verbinski’s diverting animation Rango nodded conspicuously towards Leone and to Alejandro Jodorowsky’s El Topo. It looks as if Gore is aching to make a “proper western”, but can’t quite work up the courage. One got no sense from the Pirates films that he cared a whit about the swashbuckling genre. The Lone Ranger, by way of contrast, features some lovely stretches of landscape, a few very respectable gunfights, and a sure grasp of desperado etiquette.

Sadly, the film is ultimately forced to abandon its semi-serious ambitions for an embrace of the cheap movie-serial aesthetic: horses ride trains, Tonto balances on planks, The William Tell Overture blares. This is The Lone Ranger, after all. What did you expect?

It all adds up to a peculiar, corrupted, diverting hodgepodge. Verbinski has, surely, earned sufficient money for Bruckheimer to allow him to insist on whatever class of grown-up western he fancied. Having compromised with a land-bound semi-sequel to Pirates, he now finds himself the director of a notorious flop instead. If you’re going to go down, at least go down on your own terms.

Still, it’s not as bad as you’ve heard.