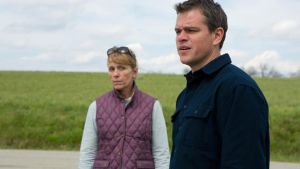 Gus Van Sant is, it seems, still in a mainstream mood. It’s been quite a while since he made a film in which nothing much happens to nobody in particular to no discernable purpose. Now he follows up the fine Milk and the execrable Restless with a worthy, implausible but surprisingly charming film on the hot topic of natural gas fracking.

One senses all kinds of conflicts in the piece. There are some original turns. There are many cheesy moments. All the performances are strong. If Van Sant were still in experimental mode, we might argue that he was consciously trying to make Frank Capra’s The China Syndrome .

Working from an outline by (of all people) postmodern hipster Dave Eggers, Matt Damon and John Krasinski have written a script concerning two representatives of a rapacious energy company who travel to a small Pennsylvania town with instructions to suck up every piece of land. Natural gas has been discovered beneath the hamlet and (the too sinisterly named) Global Crosspower offers the citizens an escape from financial depression and ongoing rural decline.

The best decision the writers make is to present their antiheroes as good people seeking to do the wrong thing for the right reasons.

We first see Steve Butler (Damon) being charmed by corporate lizards – their malign status telegraphed by the ordering of an expensive Margaux – in a swish New York City restaurant. Steve rapidly puts distance between himself and the suits by explaining that he grew up in a small town and still smarts at the memory of that locale’s slide into economic devastation. His mission is to save the citizens from a similar fate.

That noted, Steve is not above a bit of benign subterfuge. His first move upon arriving in town is to ditch the suit and pull on jeans, a flannel shirt and his grandfather’s rugged boots. His partner in the operation is a smart-talking, middle-aged mom named Sue Thomason (Frances McDormand).

Steve and Sue form a charming, creatively abrasive double-act. It’s a shame the rest of the film doesn’t live up to those two cracking performances. (At one point, referencing badinage between Doris Day and Rock Hudson in Pillow Talk , Van Sant presents a phone conversation between the two in split-screen.)

At first, everything goes swimmingly for the corporate hucksters. Most of the citizens seem happy to part with their land and embrace a prosperous future. But an elderly science teacher (the always welcome Hal Holbrook) has been doing some research and has discovered that the fracking process – essentially, forcing the gas out with pressurised fluid – has caused pollution and contamination in other areas. An annoying environmentalist (Krasinski) later turns up to further queer the pitch.

Whereas the writers have been brave in allowing the heroes to be villains, they surpass even Capra in their determination to idealise and sentimentalise small-town values. Yes, Steve and Sue really are welcomed in for a consoling slice of fruit pie. The local schoolteacher (Rosemarie DeWitt), who wavers between Steve and his environmentalist rival, works in a classroom stuffed with apple-cheeked munchkins.

Much of the narrative is staggeringly clumsy: a day after selling his land, one poor rube turns up in a sports car; Steve is persuaded to turn to the light side when a wee girl on a lemonade stand insists he take his change; a final twist is so absurd you half-feel you’ve slipped into a daytime soap opera.

Still, the interplay between Damon and McDormand is so tasty, and the film-makers’ sincerity so indisputable, that Promised Land never entirely spins off the rails. It’s hard to swallow, but easy to digest.