The director of Oscar-nominated films such as ‘Awakenings’, will forever hold a place in movie history 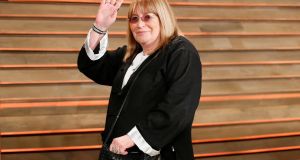 Penny Marshall, who has died in Los Angeles at the age of 77, will forever hold a place in Hollywood history. In 1988, her delightful comedy, Big, starring Tom Hanks as a boy in a man’s body, became the first film directed by a woman to take $100 million at the box office. Her next feature, Awakenings, received an Academy Award nomination for best picture.

Marshall’s A League of Their Own (1992), concerning the Girls Professional Baseball League that began during the war years, was another smash and coined the immortal line: “There’s no crying in baseball!”

At this point, she could reasonably claim to be the only A-list female director working in Hollywood. Sadly, the situation has improved only slightly since then, but those changes that have come owe much to Penny Marshall’s efforts. Ava DuVernay, the acclaimed director of Selma, was one of those who followed on. “Thank you, Penny Marshall. For the trails you blazed. The laughs you gave. The hearts you warmed,” she said on hearing of Marshall’s death.

Marshall was already a legend before she first picked up a megaphone. Following a respectable career in minor roles, she scored a role as Oscar Madison’s long-suffering secretary in the TV version of The Odd Couple.

The real buzz began in 1976 when two recurring characters from Happy Days were spun off into the sitcom Laverne & Shirley. Starring Marshall and Cindy Williams as two roommates living fractiously in late 1950s Milwaukee, the series did not travel much outside the US, but it was a genuine sensation in its home country.

By the third season it had become the most-watched show on television. ABC licensed Laverne & Shirley dolls. There were board games, jigsaw puzzles and inevitably a record album - recorded in character – called Laverne & Shirley Sing. The series eventually ground to a halt in 1982 when Williams fell out with the network over arrangements concerning her pregnancy.

By this stage, a version of Marshall had lodged in the American consciousness: a hard-talking, dry New Yorker with a voice that could drone its way through girders.

She was a natural comic who could dominate a scene just by being herself. “She made the transition from sitcom star to A-List movie director with ease and had a major impact on both mediums,” Ron Howard, who acted with her in Happy Days, said. “All that and always relaxed, funny and totally unpretentious. I was lucky to have known and worked with her.”

It was in the blood. Her mother was a tap dancer and her father was a film-maker. Her older brother, Gary, also a legend of film and television, directed such smash movies as Pretty Woman, Runaway Bride and Beaches.

Of Italian descent, Marshall grew up in the same part of The Bronx that gave the world Neil Simon and Ralph Lauren. Interestingly, despite dancing and acting as a kid, she spent a few years studying mathematics at the University of New Mexico, but the lure of the family business was too tasty to resist.

By the early 1960s she had moved to New York to join Garry, who was working on the Dick Van Dyke Show. He later created The Odd Couple sitcom – developed from a play by their old neighbour Neil Simon – and helped Marshall towards the front rank.

It is worth remembering the ground she broke for women in film, but those landmarks should not overshadow the excellence of the work itself. Big is one of the best American comedies of the 1980s. Drawing a star-making performance from Tom Hanks, it touched on male insecurities while offering gentle digs at the era’s aggressive corporate culture.

Already a very experienced performer, Marshall knew what beats to hit and how to spur creative interactions between Hanks and co-star Elizabeth Perkins.

A League of Their Own owns the distinctions of being among the best sports comedies and of extracting an excellent comic performance from Madonna (nowhere near as consistent before the camera as behind the microphone).

She had not directed a film since Riding in Cars With Boys from 2001 and it seems likely that the financial underperformance of that admirable Drew Barrymore drama got in the way of any return to the fray. Female directors have always had to work that bit harder. Many are the men who direct flop after flop. If a woman makes an underperforming film, her gender is too often discretely slid into the narrative.

Penny Marshall, nonetheless, remained to the front of the American consciousness. Like Garry, she had a warmth that scarcely dimmed throughout the decades. Rob Reiner, the actor and director, to whom she was married in the early 1970s spoke for many. “I loved Penny. I grew up with her,” he said. “She was born with a great gift. She was born with a funnybone and the instinct of how to use it. I was very lucky to have lived with her and her funnybone. I will miss her.”